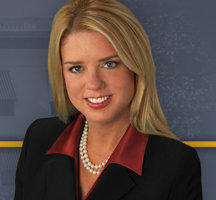 Florida attorney General Pam Bondi announced Friday the state will join with Texas to sue the Obama Administration over what it describes as an overreach. The move is a response to President Obama’s executive order which allowing millions of undocumented immigrants to remain in the United States without fear of deportation.

In a statement, Bondi says the lawsuit is not about immigration, but about laws.

"The powers granted to the President are expressly laid out in the United States Constitution, yet President Obama has decided to ignore those parameters,” Bondi says. “We need to fix our system of immigration, but willfully turning a blind eye to the inconvenience of law and rule is not the path to a remedy, but a prescription for unwarranted presidential overreach."

In August, a federal judge ruled Florida’s same-sex marriage prohibitions are unconstitutional, and the case now heads to the Eleventh Circuit Court of Appeals.

According to ACLU spokesman Baylor Johnson, even though the federal ban known as The Defense of Marriage Act—or DOMA—was struck down last year, state laws can get in the way of same-sex couples applying for federal benefits.

Pam Bondi: No Lobbyist will Compromise My Office

If things had gone as planned, USF Department of Anthropology Associate Professor Heide Castañeda would have spent the last two months in Texas and Mexico on a pair of research projects. She was going to talk to "mixed status" families on both sides of the border - families who have both legal and undocumented immigrants living in the United States - as well as meet with immigrants returning to Mexico.

Instead, she arrived just as the world's attention turned to the increasing number of Central American migrants fleeing their homes for what they thought was the promised land of the U.S.

Castañeda talked to University Beat on WUSF 89.7 about her visits to Sinaloa, Mexico, and McAllen, Texas, and what she saw there.

Listen
Listening...
/
11:24
An extended University Beat interview with USF Department of Anthropology Assoc. Professor Heide Castañeda on her trip to Mexico & Texas and the Central American immigrants she encountered there.

Here are some highlights from that interview:

Florida Attorney General Pam Bondi, who was easily re-elected to a second term, is defending her decisions to take free trips to conferences and socialize with attorneys that represent corporations under investigation by other states.

Gift disclosure records show that in the last four years Bondi accepted more than $51,000 worth of meals, hotels and free trips — to conferences in locales ranging from California, Wyoming and Michigan as well as for trips to Mexico and Israel with other attorneys generals.

Republican Pam Bondi has been re-elected as Florida's attorney general.

Voters on Tuesday chose the incumbent Bondi over Democrat George Sheldon. With over half the expected vote counted, Bondi led 55-42 percent.

The 48-year-old Bondi is a close ally of Gov. Rick Scott and is confident Scott will be re-elected. She raised more than $4 million for her re-election. That dwarfed the money raised by Sheldon, a former legislator and Department of Children and Families head.