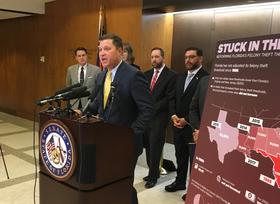 One proposal would raise the felony threshold for property theft from $300 to $1,500—the same level as neighboring states.

The other measure would give judges the leeway to depart from mandatory minimum sentences.  Sen. Jeff Brandes (R-St. Petersburg) says that flexibility is vital in drug cases.

“In many cases the mandatory minimum will still be imposed on individuals,” Brandes says.  “But in certain cases the best thing to happen is individuals go receive treatment for their addictions.”

Brandes’ measure applies to all of Florida’s minimum drug sentences.  But the judge can only depart downward when the offense isn’t part of organized crime, was non-violent, and didn’t result in death or serious injury.

Florida Gov. Rick Scott is sending his final round of budget recommendations to state legislators.

This week, Governor Rick Scott announced tax cuts he'd like to have in place for next year. But he also recently said he wants to spend almost $2 billion dollars on environmental projects.

Listen
Listening...
/
Click here to listen to the audio version.

A revived bill that wades into the abortion debate has passed its first Florida Senate Committee, but not without opposition.