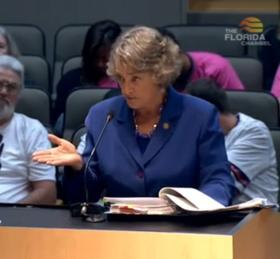 A couple of measures aimed at helping Florida’s most vulnerable are now heading to the Senate floor, after passing their last committee Monday.

A measure aimed at building on past reforms to revamp Florida’s child welfare system unanimously passed the committee. It’s by Sen. Eleanor Sobel (D-Hollywood) in her role as chair of the Senate Children, Families, and Elder Affairs Committee.

The Florida Department of Children and Families has been dealing with a series of child deaths under its supervision, and lawmakers last year worked on an overhaul law to prevent that from happening. And, Sobel says this measure includes some more areas to help build on that.

“The first thing that it does is expands the criteria to deploy the Critical Incidence Rapid Response Teams,” added Sobel. “These CIRRT teams are the special teams that go in and investigate child deaths. Many of you are familiar with the child deaths that have recently taken place and these CIRRT teams are from actual outside the district where the incident and death have occurred. The bill provides that a team may also be deployed in other cases involving the death or serious injury of a child, including those with an open investigation.”

And, she says it also expands some other roles.

“It also requires the advisory committee that reviews the CIRRT team reports to meet and submit the reports quarterly, instead of annually,” continued Sobel. “So, we’re beefing up the reports and finding out why these deaths occur so in the future we can prevent these deaths, if possible.”

Another measure that passed the Senate Fiscal Policy Committee unanimously is by Sen. Nancy Detert R-Venice). Its aim is to revamp Florida’s guardianship laws.

“This bill is frankly my top priority because I think it’s urgent. I think vulnerable people are being taken advantage of, but it cost money,” said Detert.

Several media reports have talked about cases where there are appointed guardians taking advantage of the wealthy elderly. Detert talked about a Holocaust survivor, who she says was targeted in her district.

“They charged her $1,000 a day to administer her money, $85 an hour to make doctor’s appointments, to open her mail, ordinary things,” she explained. “This is not an isolated case. There are a slew of these cases. What we have in the state of Florida is we have public guardians who are regulated and overseen. But, then, we have professional guardians who are not regulated.”

So, Detert’s measure among other things would require judges to select from a registry or a pre-approved list of professional guardians on a rotating basis.

The two high profile death incidents that occurred in recent months has already spurred a number of changes to Florida’s child welfare agency. That was part of an update two panels in the House and Senate received Thursday as part of a presentation looking at a new law overhauling the agency.

One of the worst problems facing Florida's troubled child-welfare system, advocates say, is job turnover among the case managers who oversee adoption and foster-care services --- 80 percent in some parts of the state.

It's costing Florida tens of millions of dollars a year, and those are just the costs that can be quantified.

New money, a new leader and a sweeping new law had Florida's child-welfare professionals and foster parents feeling cautiously optimistic at their annual gathering this week.

After nearly two years of turmoil, the 2,650 attendees at the Department of Children and Families' Child Protection Summit appeared ready to roll up their sleeves and get down to business.

The Senate sponsor of Florida's sweeping new child-welfare law says she'll be back next year with a bill to expand its reporting requirements.

A Florida Senate panel on Wednesday approved a sweeping child-welfare reform bill amid calls from foster parents to help more children and pleas from providers to fund the changes properly.

The Senate Health and Human Services Appropriations Subcommittee voted 12-1 to approve a measure (SB 1666) that collapses three bills (SB 1666, 1668 and 1670) into one. It would make a series of changes to the Florida Department of Children and Families and the community-based care agencies that provide adoption and foster care services to children in the state system.