Gov. Rick Scott has about 10 days to sign legislation appropriating money to counties hit by the 2010 Deepwater Horizon oil spill. A settlement deal gives the state about $2 billion over several years.

The money goes from the state to the Triumph Gulf Coast nonprofit corporation. Counties will get 75 percent of what is given to the state, with a certain percentage going to the hardest hit counties in Northwest Florida. Tallahassee Sen. Bill Montford said the measures make sure the legislature can’t sweep the money for another purpose. 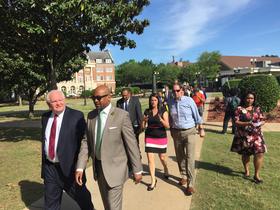 “Within 30 days those funds are to be transferred to Triumph and then put in an interest-bearing account," he said. "Clearly these were not state dollars, quite frankly, these were dollars earmarked for these eight counties.”

Triumph Gulf Coast will award the money to counties based on local government project recommendations. British Petroleum has already given $400 million to the state from the settlement. The company will pay Florida about $107 million yearly starting in 2019 and going through 2033.

"This is a very, very unique opportunity for economic development and growth in North Florida," Montford said. "And the nice thing is it’s a steady stream of income, especially for those long-range projects.”

The legislation increases the number of board members to seven and prohibits former staff from directly benefiting from the money for six years.

After keeping the money locked up for nearly a year, Florida legislators have finally agreed on a plan to hand out millions of dollars given the state for damages related to the 2010 Deepwater Horizon oil spill in the Gulf of Mexico.

Listen
Listening...
/
4:10
University Beat report on the Gulf oil spill research being done during a six-week expedition aboard the R/V Weatherbird II.

A team of marine scientists, led by representatives of the University of South Florida, are about midway through a six-week expedition looking for evidence left over from the two largest accidental oil spills in the Gulf of Mexico.

Next summer, a group of marine researchers and local politicians who gathered at a Tarpon Springs shipyard for a ceremonial keel laying plan to return for the dedication of a new research ship.

With the touching of a blow torch to the keel Wednesday morning, construction formally began on the 78-foot vessel at Duckworth Steel Boats.

On April 20, 2010, a wellhead a mile below the surface of the Gulf of Mexico exploded, killing 11 workers aboard the Deepwater Horizon oil platform.

In the subsequent leak, more than 200 million gallons of oil spilled out. On the Gulf’s surface, the oil covered up to 68-thousand square miles – an area roughly equal to the size of Florida.

Local scientists are studying the long-term effects of the 2010 BP Deepwater Horizon oil spill in the Gulf of Mexico. It’s part of an international research project. It’s been six years since more than three-million barrels of oil poured into the gulf.