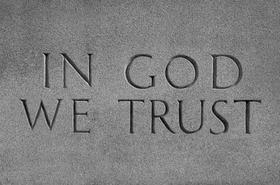 A bill has passed its first legislative committee requiring schools to display the state motto, “In God We Trust.”

“House Bill 839 requires each district school board to adopt rules that require all schools and all buildings used by the school to display in a conspicuous place, the state motto: ‘In God We Trust,’” she said, during Tuesday's House PreK-12 Innovation Subcommittee meeting.

“In God We Trust” can mainly be seen on money, and even specialty license plates. So, Daniels says given its historical significance, why not schools?

“In 1864, ‘In God We Trust’ first appeared on the two cent piece,” she added. “In 1957, a law was passed by joint resolution to declare that ‘In God We Trust’ be placed on paper currency. This motto is inscribed on the walls of this great Capitol, and inked in our currency, and it should be displayed so our children can be exposed and educated on this great motto, which is a part of this country’s foundation.

But, Sue Woltanski with parent group Common Ground opposes the bill. She calls it “redundant and unnecessary.”

“Currently, state statute requires that the state flag be displayed in a suitable place, and in an appropriate manner on the grounds of every elementary and secondary public school and that the school boards furnish those flags when necessary,” she said. “What that means is that current statute satisfies the requirement to display our state motto, which is of course on our state flag. Common Ground is opposed to bills that fail address real issues in education and wastes taxpayer dollars and time.”

Still, that did not deter a bipartisan group of lawmakers from supporting the bill. Like Daniels, Rep. Mel Ponder (R-Destin) is sponsoring the House bill as well.

“Time and time again, I think we too as a culture, as a nation, even other nations as well from one generation to the next will forget the testimony, will forget the heritage, will forget the DNA, of what the prior generation brought to the table. For supporting something like this, it is already our state motto, but also is a bedrock we as a state and we as a nation have developed and become upon. And, I think how great of us to put honor where honor is due to celebrate the bedrock of our nation of ‘In God We Trust,’ so that our kids if they ask, if it’s in their school system, we have a testimony to share of what it means to us, to us as a state, and us as our nation.”

“We look at what’s happening with a lot of our young people today,” he said. “We’re taking God out of everything. This country was built on God. And, when you look around right now, just go into your communities right now, and see how many young people are even attending church anymore. And, many of them don’t even value or respect life anymore. So, I think this is a great move.”

According to the bill’s staff analysis, district school boards will have to pay for the cost of putting the motto on the wall. Daniels says she doesn’t see it as a significant cost. And, while her measure has passed its first House committee, its Senate companion bill has not yet had a hearing.