Florida lawmakers are cracking down on the synthetic opioid fentanyl. Legislation punishing its possession is heading to the governor.

Opioids like heroin and oxycodone kill pain and activate the reward center of the brain. Fentanyl is 50 times more potent than heroin and can cause overdoses and death. But under current law, possessing fentanyl is not a felony. Republican Rep. Jim Boyd said his legislation targets drug dealers and traffickers.

But judges don’t have a choice on sentencing under Boyd’s measure. Offenders convicted with four grams of fentanyl would serve three years in prison. People caught with 14 grams would face 15 years and 25 years for 28 grams. 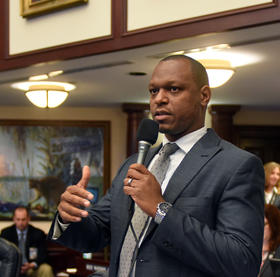 An amendment by Democratic Sen. Randolph Bracy would have allowed the judge to consider criminal history, character and chance of successful rehabilitation. Democratic Sen. Jeff Clemens argued for the amendment.

“There are people who do bad things," he said. "But there are also people who do bad things and deserve a second chance. And so if we’re going to sit here today and talk about whether or not people should be sentenced appropriately, why don’t let the judges make those decisions? They’re the ones who hear the facts of the case.”

Bracy said he removed the mandatory minimum sentencing language in committee, but it was added back.

“The concern was from the sponsor was that the minimum mandatory was applied to more than just fentanyl, it was for all drug trafficking," he said. "So what I did was narrowed it to just this substance.”

Sen. Jeff Brandes said the problem with mandatory sentencing for fentanyl is that it’s mixed into other illegal drugs. So someone could possess fentanyl and not know it.

“And judges may be able to say ‘Look this is the first time and they were caught with some other type of drug, they had no clue what was in it,’" he said. "And all of a sudden with one extra gram, their penalty went from 15 to 25 years or from 3 to 15 years. Imagine that. Imagine it’s your kids. Imagine you standing up there and asking that judge and him saying ‘I can’t do anything. Go talk to the prosecutors.”'

But members of the House and other senators opposed the amendment. Senator Kelli Stargel says her daughter has two friends who have died of fentanyl overdoses.

“Maybe the message could be to our kids ‘Don’t use any of the drugs’ because it may have fentanyl in it and it may have a stronger amount of drug than what you had anticipated," she said. "And guess what, if it does have fentanyl in it, not only might it kill you, but you might also be going to jail for longer than you had intended for the other drug you were using.”

Gov. Rick Scott declared an opioid “state of emergency” earlier this week. That allows the state to draw $27 million a year in federal funding for the next two years for treatment, prevention and recovery services.

Legislature At Odds Over Fentanyl Sentencing

The House on Thursday rejected a Senate plan to give judges more leeway in sentencing people convicted of fentanyl trafficking.

Grappling with a deadly drug scourge across the state, Florida senators Tuesday had an impassioned debate about whether the state should require mandatory-minimum prison sentences for fentanyl trafficking.