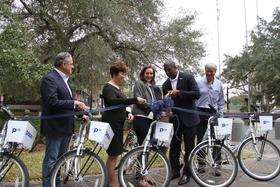 Florida lawmakers are considering legislation that would create a uniform framework for bike sharing companies in the state of Florida. Tampa Republican Senator Dana Young said her bill addresses preemption and enforcement.

“We impose a fine. We impose a $10 per day penalty if these companies get notice from the local government that their bike is illegally parked and they don’t remove it within 24 hours they get a $10 fine,” Young said.

Young’s bill also prevents counties and cities from limiting the number of bike sharing businesses that can open in their communities. Young’s bill comes just a few months after a bike sharing company opened its doors in Tallahassee with a ribbon cutting featuring city commissioners and the mayor.