Banking Black in the Sunshine Economy

What started in part by a text in response to racial tension and police shootings of black men has turned into millions of dollars directed at economic development and investment in the black community. The bank black effort is an economic call to action as much as it is a social movement.

One local bank, OneUnited, has received millions of new dollars in deposits thanks to the bank black movement. The bank is based in Boston with branches in Los Angeles and in Miami's Liberty City neighborhood.

OneUnited Bank President and Chief Operating Officer Teri Williams was among those receiving a text last summer. It caught her attention because she helps run the largest black-owned bank in the country and the text mentioned her bank by name. 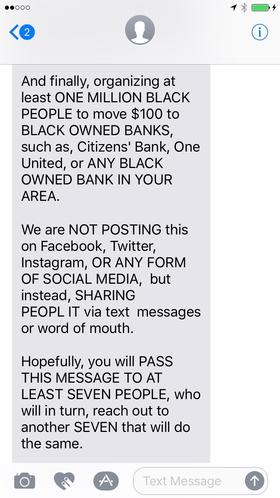 Williams now credits the bank black movement for the entire $20 million in deposit growth the bank experienced in 2016. She says the bank's loan growth has been even stronger -- $50 million.

But OneUnited concentrates its lending business on real estate, particularly rental apartment buildings charging tenants $800-$1,000 per month in rent, according to Williams. The bank does very little lending to small businesses.

OneUnited's loan portfolio is dominated by real estate. "Buy a hut," Williams says to the black community in South Florida's traditional black neighborhoods like Overtown, Liberty City and Brownsville. She reasons that gentrification is coming, and along with it, higher home values.

"Where we live, in the 'inner cities', it is the most sought after real estate today," she said. "We can't stop gentrification but we can participate in it."

Real estate can build wealth for its owners while the engine of job growth, research has found, are small businesses. New businesses especially create new jobs.

Williams says OneUnited has tried and failed to make small company loans work. And she's identified several lessons why the bank found it difficult to loan to black businesses.

WLRN: What were the lessons learned by one united in its failure in this business loan business?

You mean the process that your lending department would go through came up with bad loans?

Williams: Yes, exactly. The second (reason) is that there is a need to figure out a way to better filter the opportunities that come to the bank. All banks have a filtering process -- they call it an underwriting process -- to determine what is a good risk to take. I always say this to everyone who banks black, 'It's still your money. You're putting your money in the bank but it's still yours and you can take it out.' We are lending depositors money and we have to do it in a safe and sound manner. In doing that we go through an underwriting process. There are differences between black businesses and majority businesses that the underwriting criteria we use really didn't take into account.

Williams: One of the things that we see is that sometimes businesses come for a loan, but what they really need is more revenue. They're struggling not because they don't have access to capital in terms of a loan, but they actually don't have access to sales and opportunities to generate sales. We talk about people buying black not just banking black because our community doesn't spend enough of our dollars in our community. If we started to spend more dollars in our community that would increase the sales of these businesses and that would give them more cash flow to grow. You don't have to be black to bank black or to buy black.

The other thing that we're saying is a need for businesses to focus on leveraging their expertise by using technology. In the black community there are more labor intensive businesses that need to start thinking about how they can leverage their business, such as having a website to sell things online. That won't increase their footprint, it won't require them to spend as much money on brick and mortar, but will give them additional sales.