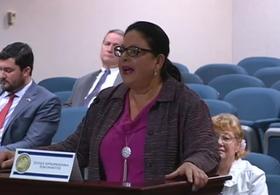 Violet Gonzalez is the Director of Community Relations for MACtown—an agency which has been serving people with developmental and intellectual disabilities for more than 54 years.

“And, we were the agency that experienced that tragedy this summer where our employee was shot, taking care of one of the people we serve,” she said.

Gonzalez is referring to last year’s high profile incident that earned national attention. A North Miami police officer shot caregiver Charles Kinsey, while his hands were raised and he was lying on the ground.

The officer later said he was aiming at Kinsey’s autistic patient, who had a toy truck in his hand—though police insisted the officer thought the toy was a gun.

And, an emotional Gonzalez says that’s why she supports a bill by Rep. Evan Jenne (D-Dania Beach) to add autism training to law enforcement agencies’ curriculum.

Still, she says she wishes it could be expanded to include other trainings.

“The people that we serve our very important to me, and I was talking to law enforcement and they’re willing to work and move forward,” Gonzalez added. “I’d like to see developmental disabilities be considered to be put on this bill because those are the people that we serve. We serve people with autism and of course, people with underdevelopmental and intellectual disabilities.”

For now, Jenne’s bill will require the Florida Department of Law Enforcement to develop continued employment training related to autism.

“…which must now include how to recognize the symptoms and characteristics of an individual on the autism spectrum and appropriate responses to an individual with these characteristics,” said Jenne. “The training can count towards the 40 hours mandated for continued employment or employment as a law enforcement officer. About 1 in 68 children have been identified as falling within the autism spectrum disorder. Individuals are estimated to have up to seven more times more contact with law enforcement agencies during their lifetime than other individuals.”

And, Jenne adds his bill has one specific goal:

“This bill is not pointing fingers or blame at law enforcement,” he continued. “This is strictly to give them more tools in their toolbox, so they never have to experience what that law enforcement officer had to go with at that shooting at MACtown.”

And, as for law enforcement, Gary Bradford with the Florida Police Benevolent Association calls it a good bill.

“Law enforcement in the state of Florida wholeheartedly supports this bill,” said Bradford. “It’s needed. We’ve had a good sponsor. We’ve had a good give and take. When situations arise and complexity of our society, as law enforcement officers, no matter what your employing agency is, we’ve got to step up to the plate and do the right thing.”

The bill is expected to cost more than $10,000, but Jenne says it’s absorbed within FDLE resources. Jenne adds he’s also hoping to pursue other developmental disabilities in the future.

A bill requiring autism awareness training for law enforcement officers is starting to move in both chambers of the Florida Legislature. It comes after a high profile incident that occurred in South Florida last year involving a black man, an autistic man, and law enforcement.