Artificial Mangroves Could Bring Back Vanishing Habitats In Florida

A couple researchers created fake mangroves in Manasota Key to bring back marine life that was lost from development. Along Florida’s coasts are seawalls-- built to prevent the shoreline from eroding. But that defense sometimes means removing natural habitats. Experts are now trying to turn these solid barriers into thriving ecosystems.

In Englewood, the blue-green waters of Lemon Bay lightly lap against the cement wall that shields local buildings and people from potential floods. What used to be here? Red mangroves— home to fish, crabs, and also oysters, which filter the water. 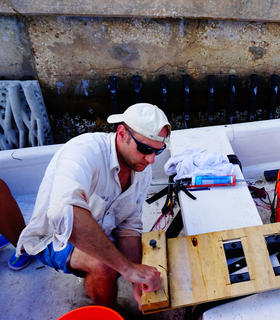 "They're so attractive as an architectural kind of exhibit-- the tree itself, the way it branches, the way the roots and branches overlap and you get a kind of continuous structural network," says architect Keith Van de Riet.

He partnered with biologist Jessene Aquino-Thomas to craft artificial mangrove panels that can be tacked right on to the seawall. They look like real mangrove roots, but they’re white-- made of concrete and ground up oyster shells.

"The reason for this is that oysters, dead or alive, send out a signal that tell other oysters, ‘Hey, this is a great place. Come and colonize this area,'" says Aquino-Thomas. 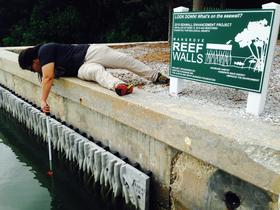 She says it’s designed with little nooks and crannies for small sea creatures to hide from predators. Aquino-Thomas comes back every two months to check the growth of marine life on the fake roots. And nearly half a year after they were installed, she’s observing small fish, crabs and some oyster larvae moving in.

"You just start to get a lot of those soft bodied animals in there and I think they kinda look like cotton candy," she says. "That's great because different animals can live in there and a lot of things you might not notice are living in there and they're all important for our ecosystems." 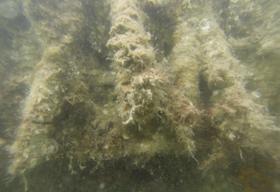 She says this cement and shell model will not produce the same exact nutrients as real mangrove trees. But she says just bringing back this structure increases biodiversity, and will help clear the water in Lemon Bay.

And the water in this particular area needs cleaning. That’s what Theresa Carrithers says. She’s the manager for Weston’s WannaB Inn—the resort helped pay for the construction of these artificial mangroves and is hosting the project on its property.

"I have noticed the decrease in some of the mangrove areas but also an increase in red tide occurrences so hopefully this will have some tie-in in facilitating to help with that," says Carrithers.

One returning guest at the resort has noticed. Kelvin Haynes of Ohio has been vacationing here the last five years.

"The fishing's not as good right now because of the red tide," he says on the resort's dock near his small boat.

He says these engineered mangroves are a good idea, and he’d like to see more of them. Architect Keith Van de Riet says that’s the goal. The imitation mangroves only cover about 20 feet along one seawall right now.

"The next steps are integrating it to a seawall panel so that a full scale seawall panel would be just dropped in and wouldn’t have to affix these things to the face of it," says Van de Riet.

The architect and the biologist say they’ll be watching how marine animals and plants react to these artificial mangroves to continue improving their model.

Watch the WGCU video below to see the artificial mangroves above and under water: