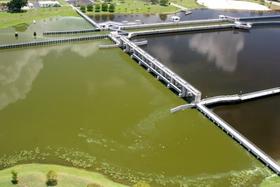 A planned reservoir south of Lake Okeechobee could take shape more quickly thanks to an Army Corps of Engineers decision.

The Army Corps of Engineers will expedite review of a new reservoir south of Lake Okeechobee.  Additional water storage was a top priority in the state Senate this year.

“They chose the option of continuing the planning process that is underway," Negron explains, "but moving up the time and dates with which southern storage will be a significant component.”

Toxic algae from the lake choked waterways in Negron’s district in 2016.  Ahead of this year's lawmaking session Negron pledged to build a reservoir south of the lake to reduce those toxic discharges to the east and west.

He sunk an enormous amount of political capital in gaining approval for the measure, and now says federal authorities are taking steps to expedite the project.

“The letter that was sent today to Florida indicates their continued cooperation with our goal to accomplish a southern reservoir so that we can reduce and ultimately eliminate these poisonous discharges,” Negron says.

Southern storage is part of the Comprehensive Everglades Restoration Plan approved by Congress in 2000, but the plan has reservoir construction beginning in 2021.  Negron wants to shave a few years off that timeline.

Listen
Listening...
/
Click here to listen to the radio version

As Tropical Storm Emily made landfall Monday, two Florida Congressmen got a lesson in how water is managed in Collier County. Their visit came after they helped secure millions of dollars for Everglades restoration.

Things are a bit quieter at the state capital, now that the year's legislative session is over. Many bills were left on the table, as always happens, but one that made it is being cheered by numerous environmental groups.

A plan to build reservoirs south of Florida's Lake Okeechobee to treat polluted water before it flows downstream became law Tuesday as Republican Gov. Rick Scott signed that and 10 other bills.