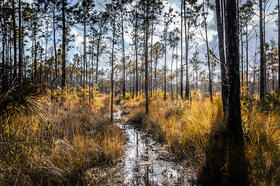 There is a series of bills working their way through legislative committees that map out Amendment One. One bill said the state’s conservation program will take a third of something called a documentary stamp tax.

It gets first crack at that money, and what’s left over is then divided up for other purposes.

And that has affordable housing advocates like Jaimie Ross with the Sadowski Housing Coalition worried.

She said before Amendment One, affordable housing used to get a cut from the entire pot of money – not just what’s left over.

“It’s a $100 million hit to veterans who are trying to get out of homelessness,” she said. “To disabled people who we need to retrofit houses for, to elderly that we’re helping to age in place. It’s all the Floridians who are in desperate in need of assistance from these affordable housing dollars.”

He said there’s a difference between what those programs are authorized to receive and what the legislature will actually give them.

Draper said Amendment One is the not reason affordable housing money would be cut. He said it’s up to state lawmakers.

“There is a billion dollar surplus in the budget right now and there are proposals to actually cut taxes this year so if the affordable housing want to look someplace where they should be able to be getting their money they should look at the tax cut. Why blame the environment? The voters didn’t create the problem for affordable housing. It’s the legislature’s problem,” he said.

The Housing Coalition’s Jaimie Ross said she would rather see a bill that allows affordable housing to take from the total pool of money - just like Amendment One.

Florida voters passed the Water and Land Conservation Amendment in November. It requires one third of documentary stamp revenue – a tax on real estate transactions - to go toward environmental initiatives.

The Florida Legislature must spend a portion of the documentary stamp money on environmental programs, like buying land and preserving springs.

A legislative scramble to carve up some $700 million dollars tied to Amendment 1 has begun. Months before the start of the annual session, a Senate committee on Wednesday began debating how to spend money generated by a wildly popular voter mandate to protect the environment, Jim Ash reports.

It was standing room only for the first discussion of Amendment 1 by the Senate Environmental Preservation and Conservation Committee. Chairman Charlie Dean, a Republican from Inverness, says there’s no shortage of suggestions about where the money should go.

Advocates for a project that could connect the entire state via bike trails hope to get a chunk of new dedicated funding from Amendment One.