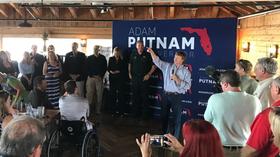 Agriculture Commissioner, and Republican candidate for governor, Adam Putnam is adding his voice to the chorus calling for a medical marijuana special session.

Putnam also took shots at a sweeping educational spending measure lawmakers passed at the eleventh hour of this year’s session.  The governor—or House and Senate leaders together—can call members back the capital.

So far they haven’t.

Agriculture Commissioner Adam Putnam says it’s frustrating that lawmakers couldn’t agree on how to implement medical marijuana. It’s up to the state department of health to figure out the rules for medical marijuana use after voters approved a constitutional amendment.

Putnam says he would prefer lawmakers to sort out the rules.

While lawmakers weigh whether to call a special session for medical marijuana, dispensaries are pushing ahead.  One grower is preparing to open its first retail outlet.

Orlando attorney and possible gubernatorial candidate John Morgan says he’s prepared to invest in the medical marijuana industry now that it’s about to expland in Florida.