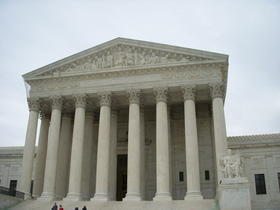 The US Supreme Court is refusing to take up a further challenge in Florida’s precedent setting capital case Hurst v. Florida.

The high court’s decision not to hear the appeal brings an end to a years-long fight over unanimous jury sentences in Florida’s death penalty system.  Attorney General Pam Bondi is ready to put the failed appeal behind her and prepare for new hearings in many cases finalized after 2002.

The state supreme court’s decision to impose a 2002 cut off for new hearings is an anomaly.  But Bondi doesn’t see a problem with carrying out sentences for the cases on the wrong side of the line.

“I don’t think Ted Bundy was a unanimous death penalty [recommendation], and clearly he should’ve been executed.” Bondi says, “So no, I don’t have a problem with that, but going forward we will respect the courts and the change in the law.”

“That’s our system—our laws evolve and change as we progress.”

There are currently 367 people on death row.  About half could be eligible for new hearings.

Florida legislators plan to take more than $1 million and 21 jobs away from a state prosecutor who announced she won't seek the death penalty any more.