After Generations Of Grief And Frustration, Families Of Korean War MIAs Are More Optimistic

Almost 8,000 American troops are still missing from the Korean War. But many of their families are now more hopeful that they'll get back their loved ones' remains.

That's partly because North Korea just handed over 55 boxes of believed U.S. remains after President Trump's summit with leader Kim Jong Un. But a host of other reasons for a their surge in optimism emerged during an annual meeting the government holds for them - which by coincidence was scheduled just days after the boxes of remains were flown to a government lab for identification.

About 800 family members of Korean War MIAs and Cold War MIAs came to the meeting, which was held at a hotel not far from Arlington National Cemetery.

The family members got to hear updates on diplomatic efforts with North Korea, learn about advances in the science of identifying long-buried remains, and were guests of the South Korean government at a huge dinner. And they could sign up for private updates on their individual cases. 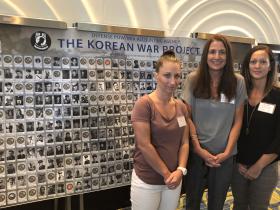 Jennifer Castaldi of Winston-Salem, N.C. has been coming to these meetings for nearly a decade. She calls her efforts to learn more about the fate of her missing uncle - PFC Marshall Lindley Bush -- a mission to bring closure to her family.

"You come each year hoping," she said. "Hoping to have just a little bit of new news, or glimmer of hope or possibility that maybe, maybe one day we'll bring him home."

Bush vanished in late 1950 during notoriously fierce fighting near the Chosin Reservoir.

Lin, as the family called him, had a twin brother named Del and two sisters. Jennifer Castaldi's mother is the last sibling left.

Given that they were twins, Castaldi says Del probably felt a special kind of heartache over his brother's loss. And he may have felt guilty because both were in the Marine Reserves, but the Pentagon said only one of them could go into combat.

The loss and the years of uncertainty about Lin's fate rippled through the rest of the family, too.

"My grandmother shut down a lot about life, after she lost her son. I would often just find her sitting in the corning, crying, Castaldi said. "And that was ... back in the day when the father went out and made the money, and the mother held the family together."

Castaldi said there was a different feeling at this year's meeting.

Attendance was the largest ever, and there was good news on several fronts. It wasn't just that had North Korea handed over the 55 new boxes, said several family members.

They also hope the seeming thaw in relations with North Korea, however faint, could result in more returns, or even open the door to the first U.S. recovery efforts there in more than a decade. 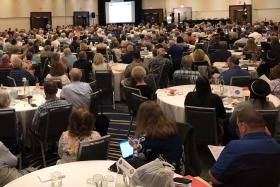 And during the meeting, military officials announced a new plan to disinter hundreds of other unidentified U.S. remains that were buried in Hawaii shortly after the war. Families are optimistic that advances in DNA science - which were the subject of several on-stage discussions during the meeting - will help identify many of those service members, too.

"I've been to a few meetings where there was nothing positive shared," Castaldi said. "No information, no new hope, families were crying, frustrated, yelling at each other. And that's not the atmosphere now."

The efforts that the United States takes to recover and identify its war missing are unique and relatively recent. They began in the mid-1960s, when families of Vietnam POWs and MIAs started organizing.

Family members say the Pentagon's oversight of the work was dysfunctional until the effort was reorganized three years ago.

"In terms of the families, we were not a partner," said Richard Downes, the President of the Coalition of Families of Korean & Cold War POW/MIAS. "It was hard to get information. It was hard to get cooperation."

"Then, something happened to the chemistry of it all," Downes said. "They call us. The exchanges are on the highest level now."

Indeed, Downes was invited to fly with Vice President Mike Pence aboard Air Force Two to Hawaii for a repatriation ceremony for the 55 boxes.

He says, though, there have been too many ups and downs in the volatile relations between the U.S. and North Korea to feel confident about the immediate future.

North Korea has returned boxes of remains to the U.S. several times over the years, but those isolated cases never led to a more permanent arrangement. And though U.S. recovery teams were allowed into North Korea for a few years, they withdrew in 2005.

"We're at a tipping point," Downes said. "These things have happened before, and we've tipped backwards. We hope this time to tip forward.

With their relatives now in their 70s and 80s, every time progress on recovering and identifying more of the Korean War MIAs is slowed or stopped, the chances get smaller that those who actually knew the missing men will live long enough to learn their fate.

Castaldi's mother, Barbara Castaldi, used to come regularly. But she's is in a nursing home now and wasn't well enough to attend this year. She's the last of the missing man's three siblings, Castaldi thinks that she's the last person alive who knew him.

But now Castaldi has started bringing her own daughter, Jessica Dillin, 33, to the meetings. Dillin said she wants to make sure that the mission that has already lasted two generations can go on until her grand-uncle finally comes home.

"My grandmother used to come with my mother, and when she couldn't come anymore, I decided to come and be her support system and try to get closure for my grandmother and the rest of the family," Dillin said.