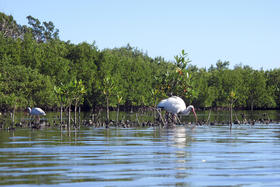 1000 Friends of Florida’s Ryan Smart is organizing a strategy session for environmentalists next month.

“Land conservation, Florida Forever, has not been the most salient issue that legislators have been dealing with. So that’s why we need to make this the most important issue, make it the most critical issue, and have a session dedicated to really doing what Amendment 1 was intended to do, which was restoring Florida Forever funding.”

Environmentalists are also upset that a statewide ban on hydraulic fracturing failed to pass, despite widespread bi-partisan support in both chambers.

Some environmental groups are challenging legislative appropriations in court.

The Florida House is pushing to change how money in one of the state’s primary environmental trust funds is spent.  But most lawmakers were in the dark about how much money the fund will get as the measure went to a vote.