Puerto Rico woke up Thursday morning to catastrophic damage and flooding after Hurricane Maria. The major storm roared across the Caribbean island on Wednesday, and the devastation – especially power outages – is island-wide.

Rear Admiral Peter Brown heads the U.S. Coast Guard’s 7th District, headquartered in Miami, which includes the U.S. territories of Puerto Rico and the U.S. Virgin Islands. He spoke by phone with WRLN’s Tim Padgett about the massive recovery effort those islands face after Hurricanes Irma and Maria, and the Coast Guard’s role.

WLRN: What’s your assessment so far, given what you’ve heard, of the extent of the damage on Puerto Rico after Maria?

BROWN: The initial reports we have, including both the TV reports that I’ve seen and also reports directly from my unit commanders on the ground in San Juan and in Aguadilla, where we have our Coast Guard air station, are that there’s a significant level of structural damage, widespread power outage, widespread lack of fresh running water and significant communications outages.

And that’s just for the major metropolitan area of San Juan. We can expect farther to the south and east of Puerto Rico especially – and then on the neighboring islands of Culebra and Vieques, and even on St. Croix – to see much more significant damage.

The hurricane indeed made landfall at southeast Puerto Rico. The flooding there is expected to be really serious. How hard will it be to get your personnel and equipment, like your Jayhawk search-and-rescue helicopters, into that deeper area of Puerto Rico far away from San Juan?

That’s a great question. One of the things we address as we prepare for a storm is moving our assets out of the storm’s path, and then predicting what’s the best way to get them back in after the storm, recognizing those kinds of transportation and communications disruptions.

So what we did is we took several of our cutters, some of them home-ported in Puerto Rico, and one of our major cutters home-ported in Florida, and we moved them southwest of Puerto Rico. They’re now coming back in. So we’re not relying on roads or air transportation.

We’ve only heard of one fatality so far on Puerto Rico. And although there has been catastrophic flooding and property damage, is this as bad as you were expecting?

I think the physical damage is certainly going to turn out to be devastating. But I’ve been in the Coast Guard for 32 years, and my first tour of duty was actually in Puerto Rico. So I’ve been through many hurricanes. And one difference I can see now is the willingness of people to listen to civil authorities and the forecast prediction has played a major role in reducing the loss of life associated with hurricanes.

So our priority after life-saving search and rescue is to restore the sea ports, the facilities, the channels to get critical supplies – petroleum and other power-generating supplies – and responders into Puerto Rico and the Virgin Islands.

Before Maria hit Puerto Rico, of course, it first hit Dominica and Guadeloupe and some of those smaller islands. They were devastated. Will the Coast Guard be playing any role in helping them recover from even worse damage? 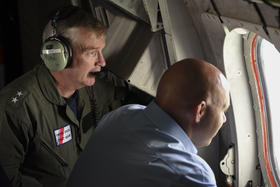 Have you heard if islands in the U.S. Virgin Islands like St. Thomas and St. Croix took as bad a hit from Maria as they did from Irma?

Is this the worst year you’ve seen yet for hurricanes hitting the Caribbean?

It’s certainly a unique combination. I was talking with my staff this morning: We have just completed four weeks of sustained hurricane response-recovery operations Coast Guard-wide – first with Harvey, then with Irma, now with Maria. And we’ve had to surge assets – and people – from one storm to another to another. It's been a continuous sprint-level effort. And there’s some wear associated with that. But we’re responding to that call, and we’ll certainly continue for some time to come.

UPDATE: After WLRN spoke with Admiral Brown Thursday morning, the Coast Guard helped rescue a woman and two children from a capsized boat off Puerto Rico’s coast. One man, however, was found dead inside the vessel.

Spared By Irma, St. Croix Gets Smacked By Hurricane Maria

Before Hurricane Maria made a direct hit on St. Croix, the island was serving as the hub for recovery efforts from earlier storms in other U.S. and British Virgin Islands.

A resident of St. Croix for more than three decades, Ditty Layton, survived Maria inside her home on the East End. Layton said, remarkably, she has not lost cell phone service and was reaching out to friends in Florida.

Puerto Rico is trying to start the process of recovering from Hurricane Maria — and it's doing so after the powerful storm blew homes apart, filled roads with water and tore at its infrastructure. Flash floods are persisting, and the island has no electricity service.

One of the strongest hurricanes to ever hit Puerto Rico pummeled the island Wednesday, tearing off roofs and sending doors flying from hinges as officials warned Hurricane Maria would decimate the power company's crumbling infrastructure and force the government to rebuild dozens of communities.