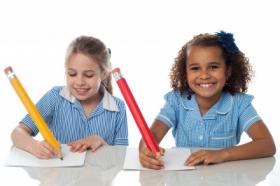 Students and civil rights activists have asked Gov. Rick Scott to hold black and Hispanic students to a higher standard. The Southern Poverty Law Center and Dream Defenders were in Tallahassee this week to deliver a petition — with 5,800 signatures — protesting Florida’s race-based academic goals.

By the 2017-18 school year, the Florida Department of Education expects 92 percent of Asian students will pass their math tests at grade level. For Hispanic students, the goal is 80 percent. For black students, it’s 74 percent.

“We’re sending a message that we expect less of certain kids for no reason other than the color of their skin,” said Tania Galloni, the managing attorney for the Southern Poverty Law Center’s Florida office. She went to Tallahassee with students and other activists to bring the petition against the unequal standards.

“We know from decades of research that when you lower expectations for a group of people, people internalize that information,” said Galloni.

The goals were adopted in 2012. Supporters of the race-based goals have argued that while the expectations are lower for blacks and Hispanics, they’re actually more demanding because those student groups have more catching up to do.

By 2022, the goals switch to 100-percent proficiency for all students.

SPLC and the Legal Aid Society of Palm Beach County filed a civil rights complaint with the Department of Justice against the Florida Department of Education last year.

“We went to the governor because, at the end of the day, he’s responsible for the state,” said Galloni. “This is a state-sanctioned policy... that’s sanctioning discrimination on the basis of race.”

Click the image to see a breakdown of the goals: 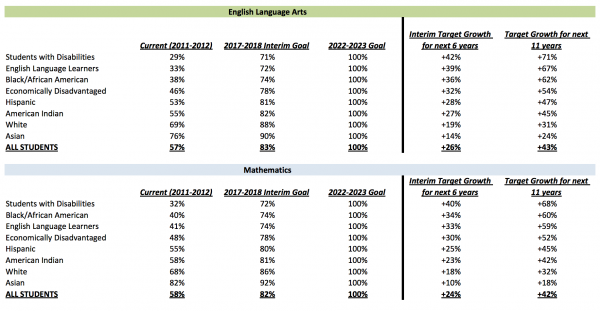 Florida high school seniors continue to struggle in math and reading, according to the latest report from the National Assessment of Education Progress, or NAEP.

Ease Up On 'No Tolerance' Policies, U.S. Agencies Tell Schools

Saying that "zero tolerance" discipline policies at U.S. schools are unfairly applied "all too often," Secretary of Education Arne Duncan is urging officials to rethink that approach. The Obama administration issued voluntary guidelines today that call for more training for teachers and more clarity in defining security problems.

Nathan B. Forrest High — the Jacksonville school named for the Confederate general and Ku Klux Klan leader — has a new name.