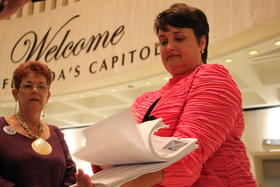 A petition signed by 5,500 Floridians has been delivered to Gov. Rick Scott’s office, asking for tight regulation of Legislature-funded crisis pregnancy centers. Nonprofit advocacy group Progress Florida is behind the effort, and says it has identified about 190 of what they call “fake clinics.” Progress Florida says the centers steer women away from birth control and abortion.

“If a clinic sets itself up as being for a woman who has an unintended pregnancy, but they do not provide the full spectrum of care or referrals to such, we would definitely say they are fake because they are not providing reproductive healthcare,” Weintraub told reporters before she dropped off the document.

The petition calls on the Department of Health to crack down on what Progress Florida alleges are “deceptive” practices used by the clinics.

“We’re going to be pushing the Surgeon General and the Department of Health,” Weintraub said. “To make sure they have their staff on site, regularly, to check and make sure that no coercion is happening, that there’s not religious content and service delivery, that the information’s accurate, and that it’s backed up by medical information.” 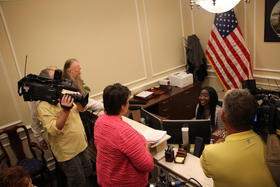 About $4 million dollars is allocated to fund the centers per year. Republican Senator Aaron Bean, who sponsored the bill funding the centers, said in February regulation is baked into the bill.

“Not only the information given on the literature and pamphlets, but all services are subject to that same bar where they’re not going to be faith based,” Bean said. “Proselytizing is not going to be prohibited in the bill.”

Gov. Scott or a staffer were not available to meet with the group when they delivered the petition.  Progress Florida as well as other groups also delivered a petition directly to DOH.

The Supreme Court on Tuesday effectively put an end to a California law that forces anti-abortion crisis pregnancy centers to provide information about abortion.

Jacksonville’s Emergency Pregnancy Services center is holding a fundraiser Wednesday night at Bold City Brewery in Riverside and protesters will be there to greet them.

Remember those billboards on the highway imploring drivers to "choose life"? Florida lawmakers want to fund them with taxpayer dollars. A bill that would cement contracts with pro-life pregnancy centers is heading to the Governor’s desk.