To prepare for sophisticated enemies, soldiers are learning to use and defend themselves against cyber weapons.

In the remote Southern California desert, the U.S. Army is testing whether it can put some its most advanced cyber tools into the hands of commanders in the field.

Those tools use computer technology to disrupt communication networks, navigational systems, and other devices. And they're becoming an increasingly important part of modern warfare, especially among sophisticated military operations like those in Russia and China.

"The next place we go to fight, we don't know where that's going to be," said Commanding Gen. Jeff Broadwater, who oversees the Army's National Training Center at Fort Irwin, Cal.

Until 2013, the facility's main mission was preparing troops to fight in Iraq and Afghanistan.  Now, it's putting a greater emphasis on readying soldiers for potential enemies that are more technologically advanced.

"The enemy that we face will have developed some lessons as we've been executing in Iraq and Afghanistan," Broadwater said.

Since last year, the Army Cyber Command has been sending small teams to work with brigades as they train at Fort Irwin and a few other locations.  The pilot project started in August and is scheduled to wrap up in the next few week.

The military wants commanders to understand the threats that Army Cyber Command can detect, and it wants them to know how to react if their communications or other vital systems are attacked.

In one training exercise, trainers used a jammer to block a tank brigade's communication channels. When brigade members stopped their tanks to figure out what was going on, the trainers attacked them with simulated fire.

"These tanks had to stop,  dismount, get out of their protection, and reduce their mobility, said Capt. George Puryear of the 11th Armored Calvary Unit.

Though it was just a drill, a similar mishap in combat could be catastrophic.

Puryear said the exercises not only are educating the troops about cyber tools, but also helping military leaders design effective training methods.

Commanders are busy, Puryear said. So while the Army has to equip them with the information they need, trainers sometimes hear pushback if they load down commanders with too much technical talk. 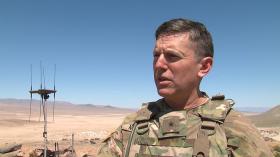 Cyber Command started the training program by sending a few advisers. By May, it was inserting small teams to work directly with field commanders — alerting them to potential threats.

The training ground at Fort Irwin contains several mock "villages," which are designed to simulate the places where soldiers might be called upon to fight a real war. The villages used to have Arabic-sounding names, but now have names that sound eastern European.

Standing on top of a wind-blown ridge overlooking one of the villages, Brig. Gen. JP McGee, the Army Cyber Command deputy commander for Operations, described how part of his small force helped with the battle over one of the villages.

"They’ve been able to take over devices inside that city and exploit them," he said.

The Army recently published the first major update to the field manual for cyber and electronic warfare. It also created a new cyber classification for soldiers. The Pentagon has not determined how much of this technology it wants to move with troops on the front line.

The American Homefront Project talks with service members and veterans about who they're remembering this Memorial Day.

As Memorial Day approaches, the Library of Congress is calling on families and friends of those who served in uniform to help preserve their stories.

Memorial Day can be especially difficult for relatives of service members who died by suicide. They often feel stigmatized, even around other military families.