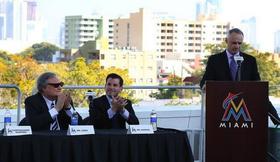 Only 20 days into his new position, MLB commissioner Rob Manfred made the official announcement alongside Gov. Scott and local leaders at Marlins Park on Friday.

The city may gain about $100 million associated with the All-Star game, he added.

Despite being under construction, Miami Beach Mayor Philip Levine said the Miami Beach convention center would be ready for the 2017 game. “We’re going to make it happen. We just gonna get it done,” he says.

Protests in Miami and Fort Lauderdale shared the spotlight with Art Basel this weekend.

Every Monday, WUSF 89.7 presents Story Corps Tampa Bay, and this week’s story comes from a recording at the John F. Germany Public Library in Tampa as part of the “StoryCorps @ your library” series.

Today we meet two professional baseball players who played in the Negro Leagues in the 1940's, Clifford "Quack" Brown and Walter "Dirk" Gibbons. Both men grew up in Tampa and they sat down with their friend, Neil J. Armstrong, who asked about those colorful nicknames.

This week's StoryCorps Tampa Bay was produced by Marc Haze.

His big-league career began in the 1950s and included the most recent Yankees dynasty. Along the way, the word "beloved" was often attached to his name. Baseball — the players, the fans, seemingly the sport itself — is mourning Don Zimmer today, after he died at age 83 Wednesday.

The tributes to the feisty guy with a good sense of humor and a bottomless love for the game are pouring out from all over, proof that he didn't waste any time during his 66 years in baseball. In recent years, Zimmer had been suffering from kidney and heart problems.