Their discussion is being held Jan. 25 at 5:30 pm at New College. Advance registration is required. Tickets are $10.

Could genocide happen here? The answer is yes, according to a survivor from Myanmar, who will speak at New College in Sarasota later this month, alongside one of the youngest remaining Holocaust survivors.

"It can happen everywhere,” said Wai Wai Nu, a member of the Rohingya community who spent seven years as a political prisoner in the nation formerly known as Burma.

“Usually, the governments and the people in power use the differences among the people to divide and promote the narrative ‘us-and-them,’ and promote hate speech against the one particular group that they can target easily," she said.

Nu is now in her mid-30s and lives in Washington, DC. She said the divisions, the disdain for certain races and cultural groups at the root of so many genocides, are visible here, in America.

Nu will be speaking at New College on Jan. 25, along with Holocaust survivor Louise Lawrence-Israëls, 80, in a talk organized by the US Holocaust Museum that comes as anti-semitism and global crises rooted in hate and discrimination are on the rise.

Growing up as a Muslim in the Buddhist majority nation, Nu she was always treated as different.

"I always felt discriminated [against] in school, on the street or everywhere," Nu said. "People like me who are a little different than typical Burmese, maybe a little brown or I pray differently, or even especially if I am a Muslim. If they knew I were Rohingya, I would definitely face more discrimination."

Her entire family was imprisoned for seven years for her father's activism.

And when she was released in 2012, attacks on the Rohingya began to escalate. Myanmar's army and police burned villages, raped women, and killed tens of thousands of people.

Nu said genocide was something she never expected to witness.

“Something like this ... It's implausible. I couldn't even think about it. It wasn't even in our mind that we would face this level of cruelty, especially in a Buddhist country."

In some cases, even Buddhist monks took part in the violence.

Last year, the US formally acknowledged that the military regime in Myanmar committed genocide and crimes against humanity against the country’s minority Rohingya population in 2016 and 2017.

It's the eighth genocide worldwide the US has recognized. But the killings, the atrocities, the massive refugee crises — they haven't ended.

Nu is the founder and executive director of the Women's Peace Network in Burma. She met the other featured speaker, Louise Lawrence-Israëls, last year at the US Holocaust Museum.

Lawrence-Israëls said it's important for people to hear from Nu, the survivor of a modern-day genocide.

"Wai Wai is one of the very few that talks, and that survived. So we need to give her a voice. And we need to make sure that people know and and hopefully there will be some help in the future," Lawrence-Israëls said.

Lawrence-Israëls was born in 1942 in The Netherlands, which was then under German occupation. She spent the first three years of her life hiding in an attic with her Jewish parents and older brother.

"My story is a tiny little story. It's not really that important. But I want people, as many people as possible to hear it from somebody who was there," Lawrence-Israëls said, raising concern about Holocaust denialism, and a recent resurgence in hate speech against Jews.

"We're targeted again. And this is just a start. That's how it started in the 1930s. So if we don't speak up, and we don't try to fight it in a very peaceful way, then it's going to continue."

The discussion at New College is sponsored by the US Holocaust Memorial Museum.

“One of the things that really moves me is just seeing the solidarity that they express for each other,” said Naomi Kikoler, director of the U.S. Holocaust Memorial Museum's Simon-Skjodt Center for the Prevention of Genocide.

“The idea that you have a Jewish Holocaust survivor and a Muslim Rohingya survivor of a genocide in Burma, and their experience has spanned almost 80 years, but when they talk to each other, when they hold hands with each other, they're doing so out of this common expression of a recognition of what it feels like to have your basic human dignity violated," she said.

Kikoler, whose grandparents were survivors of the Holocaust, will moderate the discussion Jan. 25 at 5:30 p.m. at New College. Advance registration is required. Tickets are $10.

“It immensely pains me to know that there are people like Wai Wai, who today have to every single day wake up and try to reckon with the reality that their community continues to be persecuted, who wakes up every day and does not know if loved ones are going to be attacked or under threat,” said Kikoler.

“And I really do believe that we can and must work to make sure ‘never again’ means something. It can't be empty rhetoric.”

Nu also had ideas for ways to help the Rohingya people.

“Use your digital power and tools to raise awareness about the issues. Use social media to ask your government and politicians to take actions to help the refugees and Rohingya in Burma. So that they can return home and they can get justice and accountability.

“And you can donate money to the refugees and Rohingya in general. As well, you can actually go there directly, in places like Bangladesh or Malaysia. Myanmar is not safe now. But at least those places to see on your own or to volunteer there,” she said.

Urgent action is needed because the killings haven’t stopped, she said.

“As I talk to you today, people are being killed, arrested or tortured, abused in many ways. And many people fleeing by boat are adrift on the Andaman Sea and no country is rescuing them. Just last month, a boat carrying 180 Rohingya has been drowned because there was no country to rescue them," Nu said.

“Every time I speak about my experiences or my people’s experiences, it breaks my heart. I carry a lot of trauma and exhaustion, and disappointment and sadness, everything. It's not an easy thing. But I still think that it is our obligation to continue to speak up for the situations of my own community as well as around the world.” 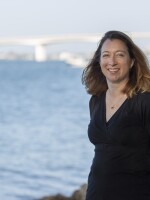