Politics / Issues
Coronavirus
News about coronavirus in Florida and around the world is constantly emerging. It's hard to stay on top of it all but Health News Florida and WUSF can help. Our responsibility at WUSF News is to keep you informed, and to help discern what’s important for your family as you make what could be life-saving decisions.

Congressional leaders took seven months to negotiate the $900 billion package, which was passed with overwhelming majorities that could overturn a presidential veto.

President Trump is slamming a $900 billion COVID-19 relief package passed by Congress on Monday after months of bitter negotiations.

In a video released on his Twitter feed Tuesday evening, the president said the bill was a "disgrace" and asked for substantial changes, like increasing payments to individuals from $600 to $2,000, or $4,000 for couples.

The relief package was passed as part of a bill to fund government operations for the rest of the fiscal year, though the president did sign a stopgap measure that extends government funding until Monday.

Trump did not expressly threaten to veto the legislation. It was passed by overwhelming majorities in the House and Senate, with enough votes to potentially override a presidential veto if Trump were to carry out that option. 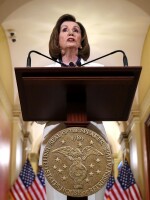