March for Our Lives Tampa is hosting a concert Saturday aimed at getting young people to vote in November. Bands And Ballots is part of the national voter-education and registration drive that began in June by student survivors from Marjory Stoneman Douglas High School.

Since the shooting, Parkland students have delivered speeches at rallies, lobbied lawmakers in Tallahassee, met with President Donald Trump in Washington and interviewed U.S. Senators Marco Rubio and Bill Nelson on live national television during a CNN town hall.

“After the Parkland shootings, I saw David Hogg and all of these influential Parkland students standing up for what they believe is right. I realized that I totally could do that too and wanted to get involved,” said Macy McClintock, a senior at Robinson High School in South Tampa. McClintock is a part of March For Our Lives Tampa and helped organize the concert.

On Monday, students held a press conference at Robinson High School in an effort to promote the show and share their thoughts on the issue.

“The whole purpose of the event is for people to realize that gun violence does not need to be perceived as a partisan issue," said McClintock. "Gun violence affects everybody. It does not matter what side of the ballot you stand on. It’s an epidemic that just makes me more passionate about wanting to make a change.”

The concert will be taking place at Curtis Hixon Park in Tampa starting at 5 p.m. Some of the expected attendees include Parkland survivors, David Hogg and Emma Gonzalez.  Others in attendance include Myara Alvear, who lost her daughter Amanda at the Pulse nightclub shooting in Orlando and members from Moms Demand Action for Gun Sense.

Bands and Ballots is free to the public, but organizers have set up a Go Fund Me campaign to help pay for the concert expenses.

Local / StateBands And BallotsMarjory Stoneman Douglas High SchoolMarch For Our Lives Tampamarch for our livesMoms Demand Action for Gun Sense. 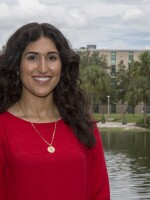 Jessica Barron
Jessica Barron is a WUSF/USF Zimmerman School digital news intern for fall 2018.
See stories by Jessica Barron
Class of COVID-19
Exploring the high costs of the pandemic for children and young adults.
Learn More
Latest Stories
WUSF 89.7 depends on donors for the funding it takes to provide you the most trusted source of news and information here in town, across our state, and around the world. Support WUSF now by giving monthly, or make a one-time donation online.
Donate Now
Related Content