The GPS technology, accessed by phone or through a website, can find grave sites just by entering a last name.

A new application designed to help find grave sites is now available at the Forest Hill Cemetery and the North parcel of Oakland Cemetery in Haines City.

Oakland Cemetery has just over 3,000 buried people there, and the new software could help to find a spot with or without a tombstone. A company called CIMS has helped implement the technology in an abundance of cities around the United States.

The About statement on the company site states: "Over the past 20 years, we’ve helped over 1,000 cemeteries in 49 states computerize their records and build GIS mapping systems using our software, CIMS."

In Pol County, Haines City clerk Erica Anderson said that although the program has just arrived, many are already asking about it.

“We have had a lot of questions about it from our residents and just from the surrounding communities,” Anderson said. “This is very new. We've had it for about 2 ½ weeks now. So we're still really trying to get it out there to the public, and let them know that this is available to them for their use.”

As for using the system, she said there have not been any issues as of yet.

“We haven't really had any issues with people being able to navigate it. We're hoping that if there are some issues, they would reach out to us, and we'd be more than happy to assist them and show them how the technology actually works,” Anderson said.

Those interested in using the new high-tech GPS tracker can could do so from home, or at one of those cemeteries.

In person, the first step would be to find the QR Code and scan it with your smartphone’s camera. From there, a page will give you a list of instructions on what to do next.

To find the location without a smartphone at home, you would go to burialsearch.com. On the opening screen, there is an area where it asks you to search the name of the cemetery. After finding the cemetery that uses the technology, a new search bar to browse by last name will pop up.

You would then click on the name of your loved one. From there, you can choose either Google Navigation or GPS Direction to find the site. Or, on the same page, it will also list the block, lot and space of the searched burial so it can be spotted that way, too.

Since it’s so new, the application is only available for a few cemeteries across the state. But Anderson said the South parcel of Oakland Cemetery could have it in a couple of years.

Anderson said an individual in Tampa recently asked how to use the QR Code. She said she would be willing to help them, and anyone else who wants to know more about the state-of-the-art software.

“Anyone that's interested if they're looking to provide this service to their residents, I commend them for it. I think it's amazing,” Anderson said. “And absolutely, we should, because we need to make things as easy as possible for our residents, and make sure they're always able to get in touch with their loved ones.” 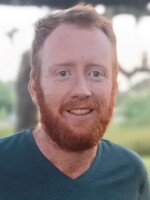