Health News Florida
Black Mental Health
Black Americans face a complex set of challenges as they try to maintain their mental health. On top of universal issues like depression, stigma and economic stress, they deal with racism, health inequities and the systemic effects of Jim Crow segregation every day. The Florida Courier, The Weekly Challenger, RoyalTee Magazine and WUSF Public Media created this series to highlight the stories of Black Floridians seeking emotional healing and wellness, and to provide resources for those needing support. This collaboration is a part of the national America Amplified community engagement initiative, supported by the Corporation for Public Broadcasting.

In their words, they tell us how they're coping with the loss of family members, pressure to perform, and uncertainty about their futures.

Black Americans face a complex set of challenges as they try to maintain their mental health. On top of universal issues like depression, stigma and economic stress, they deal with racism, health inequities and the systemic effects of Jim Crow segregation.

That’s especially acute for Black men, who rarely talk freely about seeking mental wellness. WUSF journalist Octavio Jones spoke with two Black men living in the greater Tampa Bay region, and asked them to share their lived experience. Here are their stories, in their own words.

Harold Bryant, 42, is the Community Engagement Coordinator for the Foundation for Healthy St. Petersburg. He grew up in the Perkins Heights neighborhood of St. Pete. Bryant lost his grandmother three months ago and has been learning to cope since.

“I guess growing up 18, being from St. Petersburg, I mean, you just basically live by the seat of your pants. You know, you've always been taught not to be tough, kind of deal with your problems yourself. But growing up as an adult, I see that's not the correct way to do it.

You know, I can say prayer, prayer does help a lot. I'm very spiritual type person. You know, the book of Job is pretty much that God breaks him down. And you can be at a high point and very, very high – you’ve got everything going, and he breaks you down. But in that process, you get stronger when you do the rebuild.

I do believe in guidance from my elders in the community as well, because they know the pitfalls that kind of hinder us in an advanced state. So it kind of makes me, where I have questions. I'm always a question type person.

I mean, I guess growing up, definitely, I would say, in high school, there was the riots (In 1996, 18-year-old TyRon Lewis was shot and killed by a St. Petersburg police officer during a traffic stop. His death led to several days of rioting and unrest, including when the officers involved were not charged with a crime). And the riots kind of took its toll on me personally.

Because me, I went to Gibbs High School, I wasn't in the regular program…I was in the PCCA program - so I was in the arts magnet. So when the riots happened, a lot of the kids that I went to school with, which are North County, Northside (St. Pete), they got, you know, counseling… ‘Oh, you're going into the south side, you need to prepare yourself for the riots’…and this, then, the third.

But the average student did not get that. So being, you know, home grown in the neighborhood, they pretty much told us this, you know, ‘Look out for each other.’ And that's how we protected our mental health in that particular time. That's the first time I really saw what mental health can do from the capacity of a kid.

Harold Bryant on learning to cope

Just a little backstory on me. Both of my parents are deceased, and all my siblings. I've experienced a lot of deep and close deaths before I even turned 25. The most recent was when I was like 36. And I can say in that space, you definitely have to have someone to talk to, because your go-to people, your core nucleus, they're not there.

One of those persons would be my grandmother. My grandmother was like, pretty much my therapist. She helped me get through those trying times.

It can be moments where I can listen to a song and it – SNAP – you’re just a bucket of water and you're taken back to that space. It's not really a setback. It's just basically giving space to say, ‘You know what? I'm human.’ It happens.

Then you go to…I guess, my coping mechanism. The things that I do are: I read. I pray and then I go on about my day. I don't like to stay stagnant in that moment.

I'm still doing it. I'm a work in progress. I'm definitely not gonna say I've mastered it, but I can say just overall, growing up and learning and also becoming a father…You have to learn to cope, but also still be functional.

Jai Price, 39, is an art and music curator in St. Petersburg. The father of four says he drew strength and courage from his friends to cope and he is now learning more about his mental health.

It's been some, it's been a few years since I've been trying to just navigate and figure this out and try to relate and connect more to other Black men. I noticed changes within myself. I noticed patterns between me and my dad's life, as to where I feel like it was a fork in the road. And he just took a direction, falling into some, some addictions that he wasn't able to overcome.

Not just my Dad, but my Mom as well. Because I spent so much time around her, I’m knowing where these traumas come from…when it comes to physical and mental abuse, when it comes to the bitterness and the anger that it causes. Questioning myself as to where am I where I need to be in life with choices that I've made. And then on the outside too, just looking at the world as a whole and trying to see where I fit in.

Looking back at it now, I’m understanding what my Mama went through. She always say, you know, ‘You’ll understand. You understand. When you're have kids, you're going to understand.’ And it was such a loaded statement. But I think for me, knowing that, really, I'm doing the best I can with what I have.

My Mama did the best she could with me. My Daddy had his own situations and his own things that he was trying to battle through, where he couldn't be the father that I'm pretty sure deep down he wanted to be.

I think fatherhood, just realizing that my kids are growing up with me, and I'm still doing my own growing in certain areas. I think they kind of see that. I feel the safest when I'm around them. I think they feel like that about me, but I think I feel safer around them then they do around me. That's one of the few times where I can let my guard down. Be myself, you know, be sensitive. be corny. I remember one day, my 7year-old says, ‘Everybody, think you so cool. I think you corny.’ And that made me, it made me smile. And it made me feel good. Because I don't gotta put on airs for my kids.

I feel the safest when I'm around them. I think they feel like that about me, but I think I feel safer around them then they do around me. That's one of the few times where I can let my guard down.

I feel like it's tough, because the pressure to perform, you know, and especially when it comes to us men, you know, ambition. It's a double-edged sword because that's the thing that drives us. But it could be a blinding light. Because I really do feel like all in all, I feel like every man, but really a Black man when it comes to the people that he loves, and the people that he wants to love him, deep down we want to be superheroes. We really want to be superheroes.

When we feel like we fall short of that, I think we internalize it more and we can probably damage ourselves more with the internal conflict than anybody could.

It's just a process man, because we are always evolving and always changing. Just speaking for myself personally, the anxiety with the thought of the future you, or your future path or the future period. And a depression of the past you, the pat experiences. Because that's really all anxiety is: being too far in the future. Depression is being too far in the past. And then, present circumstances, thinking I haven't done this or done that or lack of this or lack of that. And we just get so caught up into the human ‘doing’ aspect, that we forget to ‘just be.’

Octavio Jones is a multimedia journalist for WUSF Public Media. This story is part of a collaboration with the Florida Courier, The Weekly Challenger, RoyalTee Magazine and WUSF Public Media. It also is a part of the national America Amplified community engagement initiative, supported by the Corporation for Public Broadcasting.

The following are resources focused on addressing mental health care for Black men. 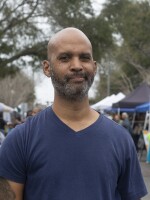