The U.S. Department of Interior named a longtime Everglades advocate and Florida Keys native to a top position Wednesday.

Shannon Estenoz, who directed the department’s Everglades restoration work under the Obama administration, will become the principal deputy assistant secretary overseeing the U.S. Fish and Wildlife Service and the National Park Service.

Estenoz had been chief operating officer for the Everglades Foundation.

Estenoz was unable to comment about the appointment Wednesday. But in an interview with WLRN late last year, the fifth-generation Conch said she started working to save the Everglades nearly three decades ago while at the World Wildlife Fund and National Parks Conservation Association.

Estenoz comes back to a dramatically different department after four years under President Trump, run by secretaries with ties to the oil and gas industry and accused of conflicts of interest. Biden made history last month when he named New Mexico Congresswoman Deb Haaland, the first Native American cabinet secretary.

“We’re thrilled for her,” said Eric Eikenberg, Everglades Foundation CEO, who hired Estenoz in 2018. “They’re bringing on an extraordinary woman who is committed to the natural resources and environment of this country.”

Former Gov. Charlie Crist appointed Estenoz to the South Florida Water Management district in 2007, where she served until Interior Secretary Ken Salazar asked her to become the point person for Everglades restoration efforts in South Florida, coordinating work between the National Park Service, the Fish and Wildlife Service and the U.S. Geological Survey.

Estenoz will take over the job of her former boss at the department, Terence C. “Rock” Salt, and report to a position once held by Nathaniel Reed, another Everglades icon who helped write the Endangered Species Act under President Richard Nixon.

When asked about the decades-long effort to fix the Everglades, Estenoz said she always understood that obstacles would be formidable.

“The way I like to think of it is, Everglades restoration is an infrastructure program that is re-plumbing an area twice the size of New Jersey, where millions and millions and millions of people live,” she said. “You had a million agencies all in charge of different parts of the Everglades. We had to almost reinvent the way government was organized.”

And then, she said, be patient.

“If you're in the business of trying to save the Everglades, it's a long game. You do not get discouraged by bumps in the road or resistance in the process,” she said. “You just keep plowing forward because what I've experienced is that we make progress. We do.”
Copyright 2021 WLRN 91.3 FM. To see more, visit . 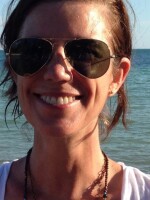