School districts across Florida are reviewing their security plans and addressing safety concerns after a mass shooting at a Broward County high school earlier this week that killed 17 people.

While grief counselors were out in force for worried students and law enforcement increased its presence at public school campuses around the Tampa Bay area, some counties sent employees to check out infrastructure and procedures.

On Friday, social media posts threatening violence led some parents to keep their children out of school in Polk and Manatee Counties.

A ninth grader in South Carolina was arrested after posting a threat on the social media app, Snapchat, to repeat Wednesday's shooting at a Bartow County high school that killed 17 people.

Jason Geary is a spokesman for Polk County Public Schools. He said they've been updating parents the last few days with emails and automated phone calls.

"We do have an increased law enforcement presence, and what we also told them is that we recognize that some parents might choose to keep their children out of school today, and those absences would be excused," he said.

Geary couldn't estimate how many students are out of school today, but added that no schools have been closed.

"Whether it's something that looks serious or not at first inspection, we have to treat them all seriously. We understand that, and we're really fortunate to have great law enforcement partners to work with," he said.

Threats have also been received at several high schools in Manatee County. School district officias say the threats were on social media - as well as a written note - aimed at  local high schools in the last 24 hours.

District spokesman Mike Barber said in a statement that investigators looked into a note was found Thursday at Manatee High School. He said they found it was not credible.

Barber says police patrols have been beefed up in and around the county's high schools.

That includes Lakewood Ranch, Braden River and Palmetto high schools --  all named on social media as possible locations for a follow-up to Wednesday’s attack.

The School District of Manatee County thanks local Law Enforcement Officers for providing an additional presence and patrols at and around our schools today. We look forward to their continued assistance tomorrow. Please thank them when you see them. #WeManatee

Hillsborough County Public Schools Superintendent Jeff Eakins said on Thursday that the eighth largest school district in the U.S. by enrollment already holds monthly fire drills -- but students and faculty will have to soon take part in an additional precautionary exercise.

"Next week, I've directed all the principals to do a lockdown with an evacuation element to that particular drill so we're coupling them together," Eakins told reporters in Tampa. "We'll continue to add that lockdown drill every month now to our fire drills that we expect on our campuses."

Eakins added that school administrators will continue receiving active shooter training, an exercise that simulates a shooting incident. He said that some teachers have had the training as well, but they plan to step up an accelerated schedule that should reach all schools by the end of the current school year.

However, students will not get that training as there are concerns that it might be too traumatic for some young people.

Eakins adds that the school board will consider putting metal detectors in schools.

"That's certainly a safety measure and we will definitely assess all of that and see the feasibility," Eakins said, before adding, "you have to have people that man those, it would be a full-length day, so there's costs other than just the metal detectors.

However, Eakins admits metal detectors might not have made a difference in Wednesday's shooting at Marjory Stoneman Douglas High School in Parkland, FL. Seventeen people were killed, 14 more were injured.

Eakins also spoke about concerns over the cost of any additional safety measures -- a major sticking point in a district where teachers are currently fighting administrators over raises and other pay issues.

"Funding is extremely important in this -- we know that our main goal every single day is to educate our children," Eakins said. "We know the dollars that we get for that, we've been taking some of that money and using it to add additional security, we're going to continually assess that."

"Even in very tough times of the budget, we have to make sure that becomes a priority in doing that," Eakins said.

Pasco County Public Schools are also taking new measures to ensure the safety of their students with an active threat plan that teaches students how to fight back instead of hiding.

“We're giving students and staff options depending on the situation. We believe that instead of the traditional lock down, huddle in a corner, you have options,” said spokeswoman Linda Cobbe.

“You can run, you can climb out of a window, you may need to barricade, you may need to run out of the building that you are in into another building, so it is right now all new to everybody but we think it is going to enhance the security of our students,” Cobbe said.

And like virtually every school district and sheriff's office throughout Florida and the country, Cobbe urged all Pasco students and staff members to report any suspicious activity on their campuses.

“Our message to our staff is to remain vigilant and to our students, if you see something, say something.”

In addition to counselors in schools, many districts, such as Pasco, are making crisis information available to students, their families and faculty on their websites. 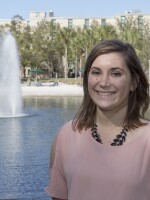 Steve Newborn
Steve Newborn is a WUSF reporter and producer at WUSF covering environmental issues and politics in the Tampa Bay area.
See stories by Steve Newborn
Postcards
Teachers are sharing their biggest challenges, in their own words.
Listen
Latest Stories
NPR
Class of COVID-19
An Edward R. Murrow Award-winning series explores the high costs of the pandemic for children and young adults.
Learn More
Related Content
WUSF 89.7 depends on donors for the funding it takes to provide you the most trusted source of news and information here in town, across our state, and around the world. Support WUSF now by giving monthly, or make a one-time donation online.
Donate Now
Editorial Integrity and Code of Ethics
Read More
WUSF Social Media Commenting Policy
Read More