The Winter Solstice is upon us, and this week’s Modern Notebook with Tyler Kline is a celebration of the longest night of the year. We’ll hear multiple works inspired by and titled “Solstice,” including a work for orchestra by Lou Harrison; one for piano and marimba by Hilary Tann; and Melissa Hui’s “Solstice,” which unfolds across time as a singular musical gesture.

Then, we’ll hear Kitty Xiao’s “Solstice I” and the first movement of Akemi Naito’s “Winter Shadow.” And a piece simply titled “Winter” by Stuart Saunders Smith… It is an aleatoric work for unspecified percussion instruments and winds which he describes as “music of co-existence.”

Hear a special encore broadcast of this edition of Modern Notebook on the night of the Winter Solstice: Wednesday, December 21 from 9-11 pm ET. 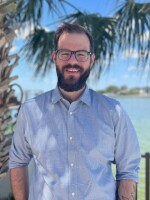