Privilege-adjacent. Invisible at times. As an Asian American, that's how I typically used to think of my minority status. Society labels us the "model minority" when it is convenient. Sometimes we're models to be emulated — when we're not on the receiving end of people's fear, anger and suspicion.

Growing up in Little Saigon, an Asian enclave in Orange County, Calif., we were actually the majority. We were so dominant that American grocery stores like Ralphs and Albertsons closed up shop and were replaced by Asian supermarkets. At my high school, where Asians made up roughly 80% of the student body, taking a day off to celebrate Lunar New Year was expected.

In a lot of ways, my family fit this model minority image. As Chinese refugees from the Vietnam War, my parents wanted to assimilate to life in the U.S. and give their children the chance at the American dream. They worked hard, stayed quiet and caused no trouble. My brother and I followed their lead: We studied hard, stayed quiet and caused no trouble (mostly). We were a middle class family living in the suburbs.

But I knew that was not the norm. When I left for college, I moved just an hour north, to Los Angeles. Suddenly, I was no longer living in a majority-minority community. On campus, in a sea of white faces and Abercrombie & Fitch, it was obvious: I didn't fit in. I studied hard anyway, kept quiet and focused on reaching my career goals.

And I got there. While at my first job, I met Rick (now my husband), a Black man with a whole set of experiences different from my own. With only three things in common, we were literally opposites. While I can laugh off showing my driver's license to prove that I was old enough to get into an R-rated movie, he would make it a point to specifically show his military ID to put people at ease with his presence. The need to constantly combat the perception that he was some sort of a "threat" was both routine and exhausting for him.

He would say with levity, "Stay out of jail so you can bail me out." It was partly a joke, but it also felt like it spoke to an underlying racial truth about our relationship – that because I was part of the model minority, privilege-adjacent, I had to use this status to defend him, should anything happen. And we came close a few times – like when a white woman accused him of assaulting her because she sat in my seat at the movie theater while I was in the restroom. It took the whole theater crowd, other white people, to defend him when a police officer arrived.

That was then. Over the last five or so years, my perception has changed. Not only did I have to worry about Rick, I also had to look out for myself. The whole idea of being privilege-adjacent felt misplaced. Afterall, there didn't seem to be any privilege when inherently racist terms like "China virus" and "kung flu" were used to describe the coronavirus. Or in the nearly 11,000 hate incidents against Asian Americans counted by the group Stop AAPI Hate between March 2020 and December of last year.

I had gotten used to not always thinking about what it means to have my ethnicity in the spotlight, or even front of mind. Now, I can't avoid it.

It's become clearer to me that the whole idea of the "model minority" is based on a myth – one that is less a celebration of our accomplishments, and more of a convenient tool to mask ongoing discrimination and systemic inequality.

In one glaring example, the conservative commentator Bill O'Reilly seized on the statistic that the median household income for Asian Americans is higher than the overall national median income as an argument against the idea that there is any such thing as white privilege, and that systemic racism against Black and brown people simply does not exist. It's an argument that's been repeated many times over.

But this stat doesn't tell our whole story. The simple truth is, there are key disparities among the more than 22 million people of Asian descent living in the U.S., and we're not all doing as well as perceived. Asian Americans are more likely than other groups to have three or more workers per household, one reason why the averages seem so inflated. We also often tend to live in some of the nation's most expensive cities, so when you factor in those costs, the apparent advantage in household income starts to evaporate.

We're also often brought up in conversations around education — as examples of the heads-down, study-hard students who would be upset by any change to race-based affirmative action in college admissions. The thinking goes that given how hard we work, we should be upset anytime someone else might take our rightful spot. But maybe diversity isn't where the focus of our frustration should be. Maybe it's the system that gives preference to so-called "legacy" students, who are predominantly white, at the expense of minority applicants.

Fitting or blending in is often used to describe us. A recent report from the advocacy group Leading Asian Americans to Unite for Change, or LAAUNCH, found that white respondents saw Asians as most similar to themselves. Yet in that same report, one in three people said they agreed with the statement that Asian Americans are "more loyal to their countries of origin than to the U.S." This questioning of our loyalty is a dark echo of a similar sentiment that provided false justification for Japanese internment camps in World War II.

Sadly, some of our progress isn't solely because of what we've done or accomplished. It's because we became less the focus of other people's anger. As a race, we've been victims of this country's history of racial violence, including the 1885 Rock Springs Massacre, which left an estimated 28 Chinese miners dead in Wyoming; and the massacre of 20 Chinese Americans in Los Angeles in 1871. According to a 2016 study by Brown University economist Nathaniel Hilger, the real reason Asian Americans were ultimately able to earn more and claim "model minority" status is because after World War II, the American system simply became less racist against us.

Now, the pandemic has put the spotlight back on us. For some, we're the ones to blame for COVID-19 and all its repercussions. Yes, the 2021 Atlanta area spa shootings that left eight people dead – six of Asian descent – shocked and appalled the nation. But it didn't end the hate incidents, or the discrimination we continue to face in ways that are both subtle and overt.

It takes a toll – about a third of Asian Americans say they've changed their daily routines due to ongoing fears over threats and attacks, according to a Pew Research Center survey released earlier this month.

I'm not discounting the progress that we've made through the years, but there's an underlying foundation of bias that we haven't fully overcome. Yes, we're well represented in Silicon Valley, but the "bamboo ceiling" still exists when only 6% of us in the national workforce are executives. Yes, we currently have more representation in Congress than ever, with 18 members in the House and Senate, but we're only 3% of that membership. And yes, people cheered when Kamala Harris became the first Asian American and first Black person to serve as vice president, but that doesn't solve the experience we all face of being mistaken for another [insert Asian person's name here].

I'm a gaysian man married to a Black man. I will always be an other. Despite my name "Gary," literally the most American name my parents could think of, I'll still be a little different. There is something about my black hair, almond-shaped eyes and slightly colored skin that makes some people believe I'm not really American despite my native English tongue, L.A. dress style and my impeccable math skills (OK, that is a stereotype).

We could be your neighbor, your colleague, even your friend. But deep down, we'll never be fully American in everyone's eyes. They'll see our black hair. They'll see our almond-shaped eyes. Whenever it is convenient for them, we won't be a model anything. 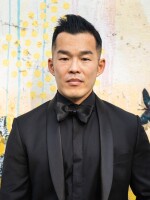 Gary Duong
Gary Duong is a Senior Marketing Manager at NPR. He leads brand awareness, podcast and audience marketing campaigns including "More Voices, All Ears" and for shows like All Things Considered, Rough Translation and The Last Cup.