The new novel 'Peach Blossom Spring' asks: Can you belong to more than one home?

There's an ancient Chinese story first told by a poet more than a thousand years ago about a place called Peach Blossom Spring. It's a paradise full of peach trees bursting with clouds of blooms. A fisherman stumbles upon this magical place, which is removed from all the social and political problems his world is so familiar with, and he must decide whether to stay in this wondrous place or return to where he came from.

Well, "Peach Blossom Spring" is now the title of a new novel by Melissa Fu, set many centuries later - a story about three generations of a Chinese family trying to decide where to stay, where to belong. They grapple with the repercussions of China's war with Japan, the Chinese Civil War and exodus to Taiwan. It's a story of dislocation, and it asks, can you belong to more than one home?

MELISSA FU: Hello. I'm so pleased to be here.

CHANG: I'm so pleased to talk to you. I so enjoyed this book. And I realize that it is a work of fiction, but you share that you have deep personal connections with some of the main characters, which I would love to understand more. Like, you mentioned that when you were a child, your own father spoke very little of his past. Can I just ask you, what was that like?

FU: I guess initially, I remember being quite curious about his past. And then somehow it was clear that we really shouldn't be asking, and he didn't want to talk about it. So we pretty much stopped - we meaning myself and - I've got two older brothers.

I like the fact that he was Chinese and that I was half Chinese. I thought that was very interesting and exciting. But after a little while, it just sort of became something rather taboo.

CHANG: You write that eventually, many years later, on Christmas Day in 1998, your father - he suddenly started sharing a few stories about his history, and you instantly started taking notes. I was just curious, at the time, what did you think you were going to do with those notes?

FU: I just knew I needed to take them. I think there was some thought of making a family tree because I have, along with those notes, a big, big piece of paper where I started trying to make a family tree. I don't know what I thought I was going to do with them. I just knew that I needed to hold on to them wherever we went. I just always knew where they were. And then the strange thing about those notes is when he knew I was working on this novel - so I'm jumping in time here, I hope that's okay - and my mom said that I had them, he didn't remember having ever told me and my brother.

FU: He said, I didn't tell them anything.

CHANG: Right, he did. Well, let's talk about the story that unfolds in your novel. And here I want to focus in particular on Renshu's journey because he and his mom end up fleeing China because of the Chinese Civil War. They go to Taiwan. And then Renshu - he eventually emigrates to the U.S. to pursue graduate studies. And when he moves to the U.S., he starts going by the name Henry.

What's interesting is that you, as the author - you only refer to this character by his American name from that point forward. Why is that? Why is he only Henry?

FU: He's only Henry, except for his mom still thinks of him as Renshu from that point forward. It was a switch. You know, I think initially he chooses a Western name so that it's easier for other people he meets and Americans, Westerners to pronounce his name. And everyone's doing it, you know. Everyone chooses a name.

CHANG: Yeah, my father, Jiang Qinghai (ph), goes by Chin, like the chin on your face.

FU: But then it's actually a change of who he is. I think it's not just the change of label, but once he goes to America, it's a new life. It's a life away from his mom in China, and now she's in Taiwan. It's - he kind of has to start over; who...

FU: ...He thinks he is and how he sees his world, and especially when he makes a decision to stay and not go back to Taiwan. And so he's Henry, and Dao Renshu is somebody else.

CHANG: Right. Well, Henry - he does start to truly leave his other life behind. He fearfully avoids standing out as too Chinese...

CHANG: ...In America. Can you explain his personal reasons for that?

FU: I think he has learned - through his experiences in the book, the character realizes that things aren't always what they seem, and you can't trust anyone and everyone. There are so many different loyalties back in Taiwan and then further back in China. I think it's not that he doesn't want to stick out as too Chinese. It's just that he doesn't want to stick out at all.

CHANG: And that fear of standing out, it extends to how he eventually wants to raise his daughter, Lily. Henry's wife is white, and Lily - I mean, she's very curious about exploring the Chinese side of her history, kind of like you were when you were younger. But Henry actively discourages her from learning to speak Mandarin, from learning about her culture. Explain that piece of that.

FU: So he wants to protect her. Everything for him - the most important thing for Henry is to protect family, whether it's trying to protect his mom in Taiwan or his daughter and wife in America. And he thinks that if she can't speak Chinese, if she's not part of the Chinese community, then no one can ask her questions that she doesn't know the answer to. He just thinks that it's a way of keeping her away from not only any sort of murky political problems, but also he wants to protect her from the sadness of his own childhood and youth. And so he just...

CHANG: Yeah. The last question is, I want to ask you about the title of this book - "Peach Blossom Spring." It refers to that old Chinese story about choosing between a new world and your old world. And I'm curious, where do you think Henry lands on that question?

FU: Oh, gosh. Where does he land? All of his actions point towards choosing the new world and letting the old one go. But he doesn't - he can't quite let it go until he reaches some kind of peace with his mother's situation. Once he does, he's no longer split between the two worlds. He has to make peace with the old world before he can choose the new world.

CHANG: Do you feel that it is hard ultimately to be both Chinese and American at the same time?

FU: Yes, but I think it's great (laughter). I wouldn't have it any other way. I mean, not that a person can choose, but in those notes, that was one of the things that my dad said. He said, it's really hard to live in two cultures. That's one of the quotes that I noted down. But it gives you a richness, and I think it gives you - or at least I've found more of a perspective or interest in all people and all kinds of ways of living, just wanting to learn everyone's story, realizing that none are straightforward.

CHANG: Melissa Fu's new book is called "Peach Blossom Spring." Thank you so much for being with us. I tremendously enjoyed talking to you. 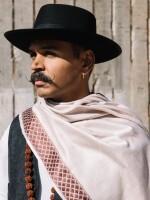