Tomorrow marks 20 years since the 9/11 attacks, and we're reflecting on the many things that have shifted lives since then. That includes a reshaped civil rights landscape for Arab, South Asian and Muslim communities targeted by massive surveillance programs in the U.S. Here's one example - Asad Dandia. He's a lifelong Brooklynite born to working-class Pakistani immigrant parents, and as a college student, he started a charity. It was called Muslims Giving Back, and it delivered groceries to neighbors in need. Now, in March of 2012, he received a Facebook message from a young man who said he wanted to become a better Muslim, so he asked to join the group.

ASAD DANDIA: And he grew very close to me in particular. He slept over at my place, met my parents, had many, many intimate conversations with me about, you know, personal, emotional, intellectual, spiritual development. We prayed together. We shed tears together.

DANDIA: He eventually publicly confessed to being an informant for the NYPD who was sent to investigate terrorism, in his own words. And to see him come out and confess that it was all a facade was a major betrayal for me. It really hurt me. It really caused me to almost go into a spiral of trauma.

CORNISH: The revelation shook the community.

DANDIA: Many of our local Brooklyn neighborhoods kind of just went into their own silos. I was asked to stop raising money for our groceries at my local mosque, and donations plummeted. People, you know, in many ways, distanced themselves from me. And I felt very guilty because I was the one who brought him into the community.

CORNISH: And he later joined a lawsuit challenging the surveillance of New York's Muslim communities. It resulted in a settlement and changes to NYPD's monitoring practices.

DANDIA: The experience of surveillance was, of course, terrifying in its initial sort of hit, but it's also been very empowering in the sense that it gave me the strength to endure.

CORNISH: Asad's case is one of many followed very closely by the Council on American-Islamic Relations. Ahmed Mohamed is the legal director at their New York office, and to better understand how these programs have evolved and their impact, I spoke to him about the surveillance that existed before 2001 and how it shifted after 9/11.

AHMED MOHAMED: Yeah. Those programs were expanded exponentially. The government was tracking, surveilling and looking after Muslims of every background all over the country. And that really started right after 9/11 with the passage of the Patriot Act, which then led to the Bush administration starting what was, in essence, a Muslim registry called the NSEER system, which was a national registry where Muslim males of the age of 18 to 25 were required to register with the federal government. That program lasted for 10 years, and, you know, that resulted in tracking, surveilling, interrogations and deportations of many innocent Muslim men who had absolutely no connection whatsoever with terrorism or, you know, the tragic, horrific attacks of 9/11.

CORNISH: How did surveillance evolve from the early years of the Bush administration, from the kind of programs you're talking about to the Obama years?

MOHAMED: They were expanded. The Obama administration ended the NSEER System, but they created new programs like CVE, which was Countering Violent Extremism, which was dedicated to recruiting community leaders to assist on identifying youth who the government said were at risk for radicalization and terrorism. And it created a real distrust in the community where, you know, youth who might be mentally disturbed or troubled or going through a difficult time at home really had their safety net pulled from under them because they couldn't go to anybody because everybody was associated with law enforcement. They were investigating these individuals, sending in undercover agents and causing the radicalization that they were supposedly there to try to stop.

CORNISH: I want to focus on New York City's program for a moment because you've described it as the most sophisticated and robust of any local program. What kind of person did the NYPD recruit for their informants?

MOHAMED: The NYPD recruited individuals who could go into mosques unnoticed and pretend to be Muslim or individuals who were vulnerable Muslims - for example, individuals who maybe were out of status with their immigration or Muslims who had committed minor offenses. And the NYPD, you know, used those opportunities to pressure and to force individuals to become confidential informants, and a lot of times, they recruited those individuals based on arrests. They went so far. It was so sophisticated that they created a demographics unit within the NYPD whose sole purpose was to map every Muslim that not only was in New York City at the time but wherever they went within a 100- to 150-mile radius.

CORNISH: The federal program and NYPD - they still carry out these efforts, even after lawsuits. Can you talk about how the lawsuits affected things?

MOHAMED: So the lawsuits, No. 1, educated the public on what was going on at the NYPD and how they were surveilling Muslims at such a systemic and everyday level, one that, you know, ordinary Americans probably didn't believe. Even Muslims themselves sometimes didn't believe it. The other thing that the lawsuits did was it created some minor reforms to prohibit the NYPD from investigating on the sole basis of religious activity. But that didn't stop surveillance, right? They have programs to scan your social media feeds. They have cameras at every corner that have facial recognition. You know, they have ways to hack into your phone, into your laptop. So the human asset that they were so dependent on for 15 years - they're less reliant on those.

CORNISH: What has been the response to those who say, look; fundamentally, these programs did either deter potential attacks, deter potential kind of radical actors or that they somehow were able to do the work of preventing further terrorism?

MOHAMED: Well, look. The NYPD themselves have stated on the record that this 15-year program of mapping and surveilling Muslims resulted in zero leads related to terrorism. It was a complete failure, and the reason for that is that Muslims are not engaged in this type of activity. They are everyday individuals just like everyone else in this country, trying to get by, you know, feed their families at the end of the day and make sure that, you know, they're able to have a good quality of life.

CORNISH: Ahmed Mohamed, legal director at the Council on American-Islamic Relations office in New York. Thank you for your time.

MOHAMED: Thank you for having me.

CORNISH: And we reached out to the NYPD. They say the settlements reached in several lawsuits show a commitment to keeping the city safe while also safeguarding constitutional rights. Homeland Security Secretary Alejandro Mayorkas says the former Countering Violent Extremism Program has shifted its model to overcome issues of trust and to better empower local communities to identify potential terror threats. 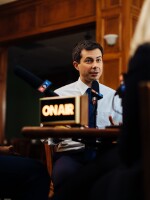 Ashish Valentine
Ashish Valentine joined NPR as its second-ever Reflect America fellow and is now a production assistant at All Things Considered. As well as producing the daily show and sometimes reporting stories himself, his job is to help the network's coverage better represent the perspectives of marginalized communities.