What's Making Us Happy: A Guide For Your Weekend Watching, Listening And Reading

The second week of the Olympics had us watching horses and swimmers and runners, and we wouldn't trade them for anything. But as we head into the final weekend of all that, we've got plenty of other entertainment on tap for the first weekend of August.

This is Project Runway without the stuff you fast forward through. This is much more a show about design than simply assembly. The designers, most of whom already have their own clothing lines, get teams of seamstresses to do the actual assembling. But the designers never get to meet their teams and have to leave incredibly detailed instructions on how to finish their garments overnight. When they come back into the workroom the next day, they see how well they've communicated their intent. It's a very clever way of showcasing the designers' management skills or lack of the same. — Glen Weldon

All Stars is always fun because people are coming back with a knowledge of having been a part of it and having grown. When the cast for season six of All Stars was announced, there were a lot of mixed reactions. Half the cast is true fan favorites and the other half are former contestants that people were less aware off. But after some really rough seasons from the franchise, it's really good to have the show kind of find a good footing again. There hasn't been a clear frontrunner this season, which has been fun. I'm enjoying it instead of being frustrated by it. — Daisy Rosario

I want to talk about Twilight Breaking Dawn: Part 2. I'm not necessarily interested in Bella and Edward, but the rest of the world, I'm really interested in. Watching this movie, I realized the one thing I love about the Twilight movies is the werewolves. I love the werewolves. I don't think there's enough of them. I think they could be a franchise on their own. In Breaking Dawn: Part 2, they started building out the world of all these other vampires in Egypt, Japan and other parts of the globe. Sitting there, I was just like "man, this would make a great series." I wish somebody would come back and make a gritty reboot of just the werewolves, just the world-building of Twilight. -- Ronald Young Jr.

Starting Monday, you'll be able to check out the new comedy series Reservation Dogs on Hulu in the FX section. It's a terrific show about a group of Indigenous kids in Oklahoma, and I think you'll be utterly charmed by its laid-back, super-chill vibe. We'll also be talking about it on the podcast soon. — Linda Holmes

Starting on Tuesday, Netflix will be releasing installments of the sports documentary series Untold, the first of which is called "Malice at the Palace" and retells the tale of the 2004 NBA brawl in Detroit when Pacers player Metta World Peace, then known as Ron Artest, went into the stands and brawled with a spectator after being pelted with garbage by a Pistons "fan." It's less that this documentary uncovers massive new facts than that it tries to contextualize that night and the consequences that came to the players — and the lack of consequences that came to pass for most of the fans. — Linda Holmes

What to listen to

The fine comic actor John Ross Bowie has a new podcast coming out on August 10 called Household Faces, in which he interviews character actors (of which he is one). I haven't heard it yet, but I've already subscribed. — Linda Holmes

Gene and Roger, The Ringer

This is an eight-part podcast looking at how Gene Siskel and Roger Ebert really transformed and popularized film criticism. There's lots of investigation into their relationship. It's the product of Brian Raftery, the same guy who wrote the book Best. Movie. Year. Ever., about the films of 1999.

In the podcast, Raftery looks at the ways studios changed their marketing and how thumbs up, thumbs down became this kind of nationally recognized bellwether of a film's commercial prospects. Whether or not you are old enough to remember seeing Siskel and Ebert on television, this is a fascinating series. -- Chris Klimek

What Else Has Been Making Us Happy Recently?

Linda Holmes
Linda Holmes is a pop culture correspondent for NPR and the host of Pop Culture Happy Hour. She began her professional life as an attorney. In time, however, her affection for writing, popular culture, and the online universe eclipsed her legal ambitions. She shoved her law degree in the back of the closet, gave its living room space to DVD sets of The Wire, and never looked back.
See stories by Linda Holmes
Daisy Rosario
Ronald Young Jr. 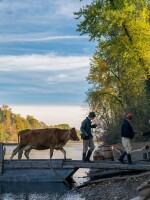