The very large container ship that blocked Egypt's Suez Canal for more than a week back in March will start sailing again tomorrow. It took a massive salvage effort to free it, and the ship's Japanese owners have agreed to pay the Suez Canal Authority. Here's NPR's Joanna Kakissis.

JOANNA KAKISSIS, BYLINE: The Suez Canal Authority's chairman, Osama Rabie, told a private Egyptian television channel that he won't reveal how much compensation was paid in the deal. The two parties signed a non-disclosure agreement.

KAKISSIS: Rabie praised the deal as important, saying it will preserve ties with the company and Japan. But Michelle Wiese Bockmann, a shipping analyst for Lloyd's List, is troubled that there are so few public details about this deal as well as the incident and the investigation into it.

MICHELLE WIESE BOCKMANN: Well, first of all, we need to know how it happened. I mean, these ships are worth tens of millions of dollars, and the trade that's upon (ph) them is worth - you know, one container ship the size of the Ever Given carries about, you know, 700 million to a billion dollars' worth of cargo. So we need to know why this happened.

BOCKMANN: Huge, unrealistic sums of money - so all of the questions that in any other industry would be raising alarm bells and people would want to be finding the answers to.

KAKISSIS: Nevertheless, the Suez Canal Authority is planning to hold a ceremony on the signing of this deal tomorrow.

(SOUNDBITE OF ...OF SINKING SHIPS' "IT'S EASIER WITH NO DESTINATION") Transcript provided by NPR, Copyright NPR. 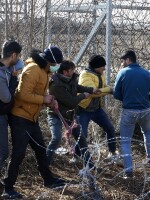 Joanna Kakissis
What Issues Matter To You?
What do you want to know before voting in local and state elections this year? WUSF is here to help.
Tell Us