Basecamp Blowup: Banning Politics At Work Prompts Over A Dozen Employees To Quit

It's been more than a week since Jason Fried, CEO of the web software company Basecamp, made a blog post outlining some policy changes at the company. And one of those changes - no more politics at work. When it comes to talking about politics and current events on work accounts, Fried wrote, it's become too much. It's a major distraction. It saps our energy and redirects our dialogue towards dark places. He went on, it's not healthy, and it hasn't served us well. The response? At least 20 employees have quit. Now to talk more about what's unfolding at Basecamp, we turn to tech reporter Casey Newton, who's been following this.

Welcome to the program.

CASEY NEWTON: Good to be here.

CORNISH: So 20 out of what I understand is something like 57, 60 employees is a lot (laughter). So what prompted this new policy?

NEWTON: Well, in February, the company began having discussions about a list that some workers had maintained for a while about names of customers that they found funny for some reason. Some of those were ethnic names, you know, maybe of Asian or African descent. And the company started a conversation about why they had done that, why they felt bad about it. And it kind of begun (ph) to spiral from there. A committee was formed to work on issues of diversity, equity and inclusion. And some very angry threads were posted to the internal Basecamp software that Basecamp makes. And it was out of those threads that this new policy emerged that the CEO wanted to shut those conversations down.

CORNISH: So was the goal to shut down what was happening in response or to actually create an apolitical workplace, which is sort of how it's being reported?

NEWTON: The public narrative was that this was about stopping employees from discussing hot-button political topics. But when I talked to employees, what they told me was all of those discussions that they'd been having internally were really about the company itself and how the company could be better and be a more just and equitable organization. So I think from the founder's perspective, though, I think they had started to feel like the company was getting away from them a little bit, like the employees were starting to have a few too many ideas about how the place should be run. And they wanted to sort of pull that back and make sure that they were in complete control.

CORNISH: You've spoken to other CEOs from different companies about this issue. What are they hearing, especially after this last year where, you know, a bunch of them put out all kinds of statements regarding maybe the Black Lives Matter movement or other things kind of telling the public they were going to care about these issues more?

NEWTON: That's right. Well, you know, so certainly Basecamp is not the first tech company to come down and say that they don't want political discussions in the workplace. The cryptocurrency company Coinbase had kind of been the first one. And I think there are some CEOs in that kind of conservative to libertarian realm who like the idea of a politics-free workplace, you know, whatever that means.

I think on the more liberal to progressive side, though, what I'm hearing from CEOs is they think that there is no way that you can eliminate these kinds of discussions from the workplace, but what you can do is channel them. You can create dedicated spaces inside company chat for workers to kind of go at it. And you can encourage employees to essentially ask for consent before wading in political topics. You know, maybe say something like, hey, you know, I would love to talk about that congressional race. Are you OK with that? And they told me that that's been a much more successful approach than trying to ban these conversations altogether.

CORNISH: Have you heard from any of the workers who have left the company or otherwise?

NEWTON: I have, and, you know, it's a really heartbreaking time for them. You know, something I will just never forget about this company is that when one employee said earlier this year that they'd like to start a committee to work on diversity issues, 20 people, about a third of the company, stepped up and volunteered to do it. That really shows you how invested they were in making this place a better workplace. And now, I would say probably over half of those employees are gone, more might be leaving. So these are people who really loved Basecamp and thought it was a great place to work. And so these past few weeks have just been head-spinning for them.

CORNISH: Finally, why do you think the tech industry is where we are seeing this very public discussion break out?

NEWTON: The tech industry is where American workers have the most power and agency. They're well-paid. They have savings. They're highly skilled. They can go out and get good jobs in other places. So they're less afraid of speaking out than maybe a blue-collar worker might be. So it's a really interesting thing to watch because I think as the tech industry has these conversations more and more, I sort of assume that they're going to begin filtering down to other parts of the economy.

CORNISH: That is Casey Newton, founder and editor of Platformer, a daily newsletter about big tech and democracy and also a contributing editor at The Verge. 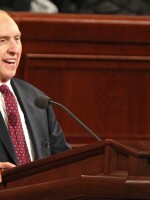 Lee Hale
Brianna Scott
Hurricane Guide
What you need to know as hurricane season approaches.
Read more
Latest Stories
Special Report
WUSF is reporting on how distribution of the COVID-19 vaccine exposes inequities in Florida’s health care system.
Read More
WUSF 89.7 depends on donors for the funding it takes to provide you the most trusted source of news and information here in town, across our state, and around the world. Support WUSF now by giving monthly, or make a one-time donation online.
Donate Now