A bill up for consideration in the House would establish a commission to study the issue of reparations for Black Americans. The bill waited in committee for three decades before it was sent to the full House for a vote. But the idea of compensating former slaves and their descendants has been around for a long time. Kia Miakka Natisse of NPR's Invisibilia podcast has more.

KIA MIAKKA NATISSE, BYLINE: Forty acres and a mule was the broken promise from the government to emancipated slaves right after the Civil War. When the government failed to deliver, many grassroots efforts sprung up instead. One of the most successful was organized by a woman named Callie Guy House. Callie had been born into slavery in Tennessee and was a toddler when emancipation happened. By the late 1800s, she was a widow, working as a laundress and supporting her five children. One day, a white man came to her church selling pamphlets. He was promoting the idea of pensions for ex-slaves.

MARY FRANCES BERRY: He saw it as a scheme that would benefit white people...

BERRY: ...Because if they passed, these Blacks were tied to the old plantations in the South and would have to spend the money that they got there and would thereby enrich the white people who he said had suffered economic loss due to losing their slave property.

NATISSE: Despite the man's dubious reasoning, Berry says Callie was intrigued by the idea.

BERRY: She had very little education and was poor as a church mouse. So for her to have enough mother wit to be able to figure out that if this man is talking about doing this, why can't we have a movement to get some pensions for ourselves without involving him? We're not thinking about the white people. We were the ones who worked.

NATISSE: So Callie came up with a plan.

BERRY: If we can get the names of everybody who was a slave and who owned them on a list, we could send it up to the government and ask the government to give us a pension for them.

NATISSE: Callie traveled the country visiting churches, starting chapters and encouraging people to add their name to the list. Ex-slaves who joined these chapters paid 10 cent dues every month, which paid for administration fees but also created a fund for mutual aid. The membership quickly grew to more than 300,000 names. Their plan was to get the government to pay pensions based on age. So if you were over 70, you'd get $15 a month, $8 a month if you were older than 50, and those under 50 would receive $4 a month. Callie's organization was called the National Ex-Slave Mutual Relief Bounty and Pension Association, and it started attracting attention.

BERRY: A lot of white people wrote to the Justice Department saying, this woman, she is sowing dissent and is riling up the ex-slaves. They have all these meetings, and then they come out swinging and hollering, and we don't know what they're doing. It's scary. This woman has to be stopped at all costs because she's dangerous.

NATISSE: The government decided to accuse her of fraud.

BERRY: And so they charged her with trying to get Black people to organize to get pensions for slavery at a time when she should have known that the government was never going to give pensions to Black people for slavery (laughter) and that, therefore, that was fraud.

NATISSE: Callie was shocked and mad when she got a letter from the government telling her this. She knew she wasn't committing fraud. And so she sent her own letter.

BERRY: She sent a long, handwritten reply that the association acted on behalf of 4 1/2 million slaves who were turned loose ignorant, barefooted and naked without a dollar in their pockets. We, the ex-slaves, feel that if the government had a right to free us, she had a right to make some provision for us. As she did not make it soon after our emancipation, she ought to make it now. And they considered her letter defiant.

NATISSE: It helped solidify the government's position. This woman and the trouble she's starting, she must be stopped. A jury of white men convicted her of fraud and sent her to prison for a year. The expectation was, with Callie locked up, the movement for pensions for ex-slaves would die. Except it didn't. The movement that Callie started, a lot of the members became active in other movements for Black liberation, like Marcus Garvey's Universal Negro Improvement Association. And by the 1950s, a woman named Queen Mother Audley Moore was leading the call for reparations. At one point, she even petitioned the United Nations. The number she came up with was much higher than Callie's ask.

QUEEN MOTHER AUDLEY MOORE: I was asking for $200 billion for the injury that we have received as a result of our enslavement.

NATISSE: Queen Mother Moore eventually helped found the National Coalition of Blacks for Reparations in America, or NCOBRA. After her, in the 1980s, was a man from Detroit named Ray Jenkins, also known as Reparations Ray. He was a real estate agent by day and by night advocated a plan for reparations that had a different goal in mind.

RAYMOND JENKINS: Now I'm asking for $40 billion for the U.S. government to put in a trust fund to give Afro Americans a free scholarship to any school or any college or university of their choice.

NATISSE: Ray pestered his congressman, John Conyers, until finally, in 1989, Congressman Conyers drafted what we now know as H.R. 40. The bill languished in committee for years, past Conyers death in 2019. By then, Congresswoman Sheila Jackson Lee had picked up where he left off.

SHEILA JACKSON LEE: Now more than ever, the facts and circumstances...

NATISSE: This year, with 173 Democrats backing it, H.R. 40 was finally sent to the House floor.

JACKSON LEE: ...On the path to reparative justice. That is what...

NATISSE: Even if it passes in the House, the bill faces more opposition in the Senate, evenly divided between Democrats and Republicans. Over 150 years later, after that first broken promise of 40 acres and a mule, America is still questioning the possibility of reparations. But just like in Callie Guy House's day, individual efforts continue to spring up, standing in the gap created in the absence of reparations.

BERRY: We don't know whether the federal government will ever give reparations. It may not, but there's no reason why we can't have individuals who care about these issues responding to local campaigns, and local people can do something.

MARTIN: That was author Mary Frances Berry talking with Kia Miakka Natisse. The new season of Invisibilia is out now with a story about a social experiment with reparations in Vermont. Listen wherever you get your podcasts. 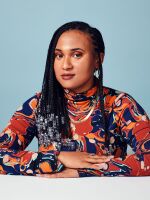 Kia Miakka Natisse
Kia Miakka Natisse is the co-host of NPR's Invisibilia. A trained journalist turned artist, her love for storytelling is a driving creative force that's led her to many unexpected places. She's worked on a number of just-okay reality shows; wrote hot takes on pop culture, jokes for teens, and comics for moms; substitute taught kindergarten and did a bunch of artist residencies, most namely the Third Coast Radio Residency, which unarguably changed her life.