Pueblo, Colo., Artists Plan To Paint The Biggest Mural In The World

Having a Guinness World Record means a lot to a city like Pueblo, Colo. It lost the title for largest outdoor mural to a South Korean city in 2018. That artwork is the size of two city blocks. Member station KRCC's Shanna Lewis reports on the effort to take back the record.

CELESTE VELAZQUEZ: Oh, it's a little intimidating - not going to lie. I was a little nervous first day. But, you know, it's - you got to get over those fears and just tackle it.

VELAZQUEZ: So my piece is going to be an Indigenous piece. It's going to represent the culture here in Pueblo and what we're about and just some of my history. So it's going to be real spiritual, real unified.

LEWIS: Multiple freight train tracks line one side of the levee.

LEWIS: On the other side, the river flows by and birds soar overhead.

LEWIS: The goal is to paint a gallery of linked murals on the nearly three-mile-long structure. Artist Valrie Eisemann of La Veta, Colo., is creating a huge mandala. It looks like a complex geometric flower with concentric rings of petals.

VALRIE EISEMANN: Look at the plans. It's going to be blue around the pink.

LEWIS: Do you do your sketch on the computer or by hand?

EISEMANN: By hand - yeah, by hand. And so it's really, like, this big. And then translating it to this has been pretty fun (laughter). It's definitely a challenge.

LEWIS: When you paint on the levee, it has to be big enough so people on the other side of the river can see it clearly. Eisemann's section is 24 by 24 feet. She needed approval from the agency that manages the levee. Not so for the muralists who first painted on the levee in the dark of night during the 1970s. They were considered vandals. But over time, city officials began to like the idea. More paintings appeared and combined to form one long mural. Six years ago, Pueblo artist Cynthia Ramu showed me some of the original murals before they were destroyed when the levee was repaired.

CYNTHIA RAMU: You can see, like, a lady with black hair and glasses. I actually painted a Chevy on the levee.

LEWIS: Ramu helped hundreds of people paint on the levee over several decades. She says the loss of the original artwork made her physically ill, but now she wants to see new murals on the blank concrete.

RAMU: I'm just ecstatic. Like, I'm barely getting any sleep because the possibilities are endless. My phone is pinging. People around the state are, like, wanting to line up. You know, it's just endless opportunities for moving forward.

LEWIS: Some images aren't allowed, like religious designs and advertising. And that's caused a bit of controversy because some artists feel that any restrictions are censorship. Pueblo Arts Alliance executive director Karen Fogelsong is on the Application Review Committee. She defends the guidelines.

KAREN FOGELSONG: Art always affects the community spirit, especially public art. You have to be very careful because you can affect somebody's daily drive to work, you know? Like, it can change their whole mood.

LEWIS: Applications are rolling in, but it could take a couple of years to reclaim the world record for largest outdoor mural. 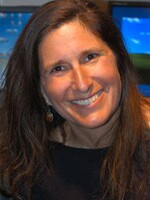 Shanna Lewis
Shanna Lewis’ work as an independent radio producer and journalist has aired on NPR’s newscast and news magazines, Voice of America, Prime Time Radio and Pulse of the Planet, among others. Freelance print and photography work by Shanna has been featured in The Denver Post, The National Post (Canada), High Country News and other publications. She is the recipient of a Colorado AP (Associated Press) Broadcast award, garnered seven Colorado Press Association awards for reporting and photography and contributed to a number of award winning broadcast, online and multimedia projects.