With 45 Hospitals In Florida, HCA Prepares For The Worst During Hurricanes

It almost didn't matter where the storm hits; HCA Healthcare's hospitals were going to be affected. With dozens of hospitals on Florida’s east and west coasts, the for-profit hospital chain is exposed every time a hurricane threatens the Sunshine State.

Late last week, the nation's largest hospital company granted WPLN rare access to observe storm preparations as Dorian bore down on the Florida coast. The mood was serious. Chatter was limited. The only sound competing with speakers was the hum of fingers on laptops taking furious notes.

Two dozen HCA staffers — representing all parts of the business — found themselves seated at a massive conference table, share twice-a-day updates and hearing from division chiefs in Florida. Radar images on flat screens surrounded them in a basement bunker built in HCA's newest building on its main campus as a forecaster explained a custom "weather intelligence" report.

"The bad news is that this storm is coming at us from an angle that we have not seen in quite some time," HCA national group president Chuck Hall told the room from the head of the table. "We need to think about that as we go into a potentially longer duration storm than what we've probably endured in the past."

Division chiefs around Florida ticked off status updates for their 45 hospitals, which stocked up on food, water and diesel fuel to last at least a week. They also topped off their medical gases, pulled together enough supplies to provide dialysis for two weeks and stocked their in-house pharmacies with antivenom — for the poisonous snakes that can out of the swamps during hurricanes.

HCA positioned nearly three dozen truck-sized generators in Florida that could fully power entire hospitals. Each facility received satellite phones. They were sent gas cards to help staff buy fuel for their own cars and overnight kits for doctors and nurses who end up stranded.

They cleaned their security cameras, cleaned up construction sites and prepared places for pets who end up coming along with evacuated patients.

Not all HCA facilities have a helipad, so they cleared portions of their parking lots where helicopters could land. And that's where the company has to make life-and-death decisions even before the storm hits.

The most important task in HCA's bunker takes place in a guarded room with frosted glass, where physicians look over medical charts to help decide which patients to fly out of harm's way — and when.

"We want to make that decision as late as possible so that we have the highest likelihood that a particular facility with be affected, but as soon as necessary to be sure we still have the window to transport a patient if that becomes the solution," said chief medical officer Jonathan Perlin.

HCA is still haunted by Hurricane Katrina, when its New Orleans hospital went dark and required heroic efforts to evacuate from a makeshift helipad on the roof.

"Katrina was really focusing for everybody," said Perlin, who led the VA Health System at the time.

Since then, HCA's emergency preparedness has grown from a one-man operation into a team that does nothing but think about "what ifs" — from natural disasters to disease outbreaks. The command center even helped manage the response at a Las Vegas hospital when a gunman attacked a country music festival.

It’s an expensive proposition, keeping medical helicopters and planes on standby for days and trucking in oversize generators from as far away as Boston — many of which may not be used.

"I do care about the expense, that we're not wasting time and resources, but when it comes to caring for our patients, the company hasn't questioned it," says Mike Wargo, HCA's vice president of preparedness and emergency operations.

HCA now views Wargo's team as a kind of "insurance program" for the system's 180 hospitals, he says.

Even at HCA’s scale, a few down hospitals quickly shows up in the earnings reports. In 2017, the company lost $140 million from hurricanes in Florida and Texas.

Corporate charter flights were standing by before Dorian hit, ready to deploy strike teams to help with the aftermath and getting back to business as usual.

Blake Farmer
Blake Farmer is WPLN's assistant news director, but he wears many hats - reporter, editor and host. He covers the Tennessee state capitol while also keeping an eye on Fort Campbell and business trends, frequently contributing to national programs. Born in Tennessee and educated in Texas, Blake has called Nashville home for most of his life.
See stories by Blake Farmer 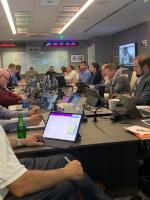