In Shelbyville, Tenn., 'Proud To Be White' And 'Hate Is Not The Solution'

I just got back from Shelbyville, Tenn. It's a town of 20,000 people not far from Nashville. And on Saturday, it was the site of a White Lives Matter rally. White nationalists and neo-Nazis put it together. This isn't new. There have been quite a few of these events lately. There was the deadly standoff in Charlottesville and the confrontations in Gainesville, Fla., and Berkeley, Calif. And we wanted to explore where these powerful emotions are coming from, so we covered this rally a little differently. We spent time with two people in Shelbyville Saturday as all this played out. Let me take you to two scenes less than a mile apart. One was a white, brick building with a sign on the window - fresh tortillas here.

MIGUEL GONZALEZ: Would you like to come into the store?

GREENE: Yeah, thank you very much.

This is Gonzalez Tortilleria. The owner, Miguel Gonzalez, brought us into the room where it all happens. Three women were pushing a mountain of dough through a machine. Miguel and his team got here earlier than usual, and that's because this wasn't a normal day. He wanted the tortillas made so he could get his staff home by mid-morning. They were on edge about what was about to happen in their town.

GONZALEZ: Today, we start about 5 o'clock in the morning.

GONZALEZ: Well, some of my co-workers - and if they feel confident to be here later on, I respect their decision to go home and stay with their family. I cannot convince them that everything is going to be safe.

GREENE: Miguel's employees are part of the diverse community in Shelbyville. It's predominantly white. There are many immigrants, and the community has become a welcoming place for new refugees. This is one reason the White Lives Matter groups decided to descend on Shelbyville. Now, Miguel, for his part, is 63. He came to the U.S. in 1972. He worked in GM plants for years in California. He became a citizen, eventually moved to Tennessee and started this business. He said the U.S. has given his six kids a lot of opportunity.

You're proud of this country right now.

GONZALEZ: I am, I am, and all my kids are. You know, I got a son who work for the sheriff department here in Shelbyville. I have a son who joined the Army. He went to Afghanistan.

GREENE: Your son is in the sheriff's department in Shelbyville.

GONZALEZ: Yes, yes, he work for the sheriff department.

GREENE: So does he have to work today with...

GONZALEZ: No, he work in the juvenile detention center.

GREENE: So will he be pulled in if there's any violence or anything to happen?

GONZALEZ: I'm not sure, but the whole police is similar.

GREENE: Would you worry about him if he had to go out there today?

GREENE: Miguel, though, said he was not worried about himself becoming a target. He was going to wait this day out running the register at his business. His other son, the Army vet, was going to come over and keep an eye on him.

GREENE: The other scene was a bank parking lot right near town square, the rally point for White Lives Matter.

GREENE: People carrying Confederate flags and plastic riot shields were gathering and getting their marching orders.

UNIDENTIFIED MAN #2: If you got a mask on your face, get the mask off your face.

GREENE: There were faces of hate. The guy just to our right was dressed in military fatigues, and he wore a Hitler mustache, and he was goose-stepping like a Nazi. And then there was Jessica Adkins. She's a member of one of the organizations gathered here, League of the South.

GREENE: It's nice to meet you, Jessica.

ADKINS: Nice to meet you, thank you.

GREENE: Good to meet you.

She's petite, in her 30s. She had a Confederate flag around her neck and a riot shield. She drove here from southern Virginia, and she said there is nothing wrong with coming out in a public space to honor her race and culture.

ADKINS: We just want to be left alone. That's it.

GREENE: Who is not leaving you alone right now? Like, if - when you say I want to be left alone, like, what is...

ADKINS: Well, that was, you know, back in, you know, the Confederate war. You know, you had...

GREENE: And what about today?

ADKINS: Well, today you have people who, you know, I'm a Christian, you know, Christian background, so I have virtues and values. And things that they are promoting out, you know, like on commercials and stuff like that, you know, that stuff's not right to me. I mean, I'm not...

ADKINS: You know, the LBGT stuff. I don't agree with that stuff. I mean, I don't hate those people, but if they want to be that, that's fine, but don't shove it down my throat, you know? And as far as multiculturalism - you know, every commercial you see on TV, it shows that multiculturalism. Why? Why is that? What - are they trying to paint a picture (laughter)?

GREENE: I want to ask you, what is the difference, in your mind, between not liking multiculturalism and racism?

GREENE: How? Explain it for me because I...

ADKINS: I mean, you don't have to - I mean, like I said, the League of the South is not out to destroy another race. They are out to preserve our race. What's wrong with that? I'm not embarrassed to be white. I'm proud of what my ancestors made me and I'm proud of what my ancestors did because they fought for my state, my homeland. You know, they created me (laughter). I mean, there's nothing wrong with that. There's no problem whatsoever with being proud to be white.

GREENE: Jessica now had to get going. The line for the security checkpoint was moving. Jessica and her group went through and then made their way to a street corner barricaded by police. A drone was hovering overhead, and snipers were peering down from city hall. There were chants that conjured Nazi ideology.

GREENE: Counter-protesters were across the street behind their own barricade, and they were yelling back.

UNIDENTIFIED MAN #3: You're not locals. You are idiots.

GREENE: After the rally was over, we wanted to check back in with Miguel Gonzalez to see how the day went for him.

GREENE: He was alone behind a cash register. It was a quiet day for him. He just wanted to know how the rally went. And it was interesting because I started chatting with him about one of the themes that Jessica brought up, this fear of intrusion from the outside. It was a concern not entirely unfamiliar to Miguel. He has seen refugees coming to Shelbyville, and he's welcomed them. He has also thought about the benefits they receive as soon as they arrive, like access to Medicaid.

GONZALEZ: I'm a citizen now. I'm retired. I - but I already put into the fund for my pension for my Medicare. I'm not using it now, but I'm hoping when I get old I get some benefits. But I've been contributing already with 45 years of my life in this country. But people come in from outside, zero seniority in this country, and already have all these benefits, Medicaid. So it is something that the government needs to be careful, but hate is not the solution.

GREENE: Miguel Gonzalez and Jessica Adkins, who were less than a mile apart from one another this weekend in Shelbyville, Tenn.

David Greene
David Greene is an award-winning journalist and New York Times best-selling author. He is a host of NPR's Morning Edition, the most listened-to radio news program in the United States, and also of NPR's popular morning news podcast, Up First.
See stories by David Greene 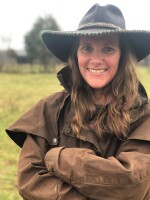 Arezou Rezvani
Justin Richmond
Class of COVID-19
Exploring the high costs of the pandemic for children and young adults.
Learn More
Latest Stories
WUSF 89.7 depends on donors for the funding it takes to provide you the most trusted source of news and information here in town, across our state, and around the world. Support WUSF now by giving monthly, or make a one-time donation online.
Donate Now