U.S. Secretary of Education Betsy DeVos visited Florida International University on Thursday, as part of a tour through educational institutions in Miami.

DeVos will be also visiting three elementary schools in Miami - the private Christian Academy for Reaching Excellence or CARE, the Sports Leadership and Management charter school or SLAM, and Royal Palm Elementary School, an “A” grade public school. She will be in the area until Friday.

This is the first time DeVos visits a four-year public university since her appointment as Secretary of Education. It is also the school where Trump’s nominee for labor secretary, Alexander Acosta, is dean of the law school.

FIU students and professors present at the meeting expressed their concerns over the future of financial aid and scholarships for low-income students.

"We're very much in the throes of the budget discussion," said DeVos. "I would just say that we are committed to investing and taking a bigger picture longer term look at how the federal government can assist and where we should stop doing things."

Prior to the roundtable, FIU President Mark Rosenberg spoke to DeVos privately to address a wide range of issues including the future of financial aid given to students from the federal government -- specifically Pell Grants.

"Pell Grants are very important for a large percentage of our student population, not just here at FIU, but in Miami-Dade County more generally," Rosenberg said. "Pell Grants are for the lowest income students and we know that there is some discussion about cutting those."

DeVos' visit to FIU, where more than  50 percent of students receive Pell Grants, stirred a small protest organized by Students For A Democratic Society, who used Facebook to promote the demonstration.

One of the posts on the group's  Facebook page said: "DeVos is a well known adversary of public education; opting instead to funnel taxpayer dollars into unregulated private and charter schools. FIU is a public institution whose student population heavily relies on various financial aid such as Pell Grants -- a program the Trump administration recently proposed to defund."

Michelle Perez, a business administration student, was one of the protesters.  She said she wanted Rosenberg to stand-up to DeVos, and pointed to DeVos' confusion at one of her initial confirmation hearings about a federal law involving students with disabilities called the Individuals With Disabilities Education Act or IDEA. 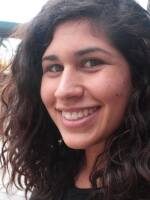 Amanda Rabines
Amanda Rabines is a senior at Florida International University pursuing a degree in Journalism and a minor in Digital Media. She is expecting to graduate in Fall 2016 but her curious nature makes her an eternal student at heart. In 2013, she spent a year volunteering every Wednesday at Radio Lollipop, a radio station at Miami Children’s Hospital, where she helped broadcast shows, create events and design crafts for children while simultaneously interacting with patients and families. The experience taught her how to talk to family members who were going through tough medical circumstances. That was the year Amanda had to learn how to be a great listener and emotionally stronger, two traits she now carries as an aspiring journalist. Amanda was born and raised in Miami, Florida, and is a strong activist for feminism. Some women who inspire her include leaders like Maya Angelou and her mother, a dental hygienist for Sunset Dentistry, who came to Miami from Cuba when she was 11 years old. Her mother endured leaving her home country, and has worked since she was 15. It’s because of her that Amanda believes in hard work and the power of Cuban coffee. Amanda has written content, shot photos and has produced videos that have been published in the Miami Herald and Sun Sentinel.
See stories by Amanda Rabines