Strong rains were not enough to keep away a crowd of more than 2,800 people that gathered Thursday afternoon at Florida Memorial University's arena in Miami Gardens to participate in a rally with president Barack Obama.

After a more formal speech at Miami Dade College dedicated to defending the Affordable Care Act, Obama took off his jacket, rolled up his sleeves and concentrated on attacking Republican candidates Donald Trump and Marco Rubio while emphasizing how electing Hillary Clinton and Patrick Murphy will give continuity to his policies.

"Progress doesn't stop with my presidency. We are just starting,"  said Obama to the crowd gathered in Miami Gardens. "But all that progress is at stake if we don't do things right in this election."

And if there was any doubt about what, in Obama's eyes, is the right course of action, he said: "Donald Trump wants to reverse progress. Marco Rubio wants to help."

"Florida, your vote matters," said the president at the rally. When the crowd booed at the mention of Donald Trump, he said: "Don't boo, vote."

That particular line resonated with Jeff Noel, a born-and-raised Miamian and community organizer who squirmed his way to the front of the crowd.

"I'm fascinated when he says, 'Don't boo, vote.' I was just waiting for that line," Noel said. "Whether you're a Republican or a Democrat or you're nonpartisan, it's true. It's true. If you want to make a change, want to make a difference in this society, then you have to vote."

Obama was fiery in his defense of the Democratic candidates in Florida, singing the praises of Hillary Clinton and U.S. Senate candidate Patrick Murphy, but parts of his speech were nostalgic, with references of this being his last visit as president.

Obama: "It has been one of the great honors of my life to serve the American people."— Kate Stein (@stein_katherine) October 20, 2016

"His presidency was more about us than him. And I will miss that, because not every candidate that runs is all about the people. Sometimes they’re all about them,"said Shawn Thomas, Miami resident, after hearing the President's speech.

Bittersweet farewell to @POTUS from this crowd. Several people told us they are sad this is his last presidential visit to Florida pic.twitter.com/vO8Yqis3y9— Teresa Frontado (@tfrontado) October 20, 2016

"Donald Trump says to vote for him, what do you have to lose? Let me tell you," said Wilson.

Wilson: "This all started as a joke. Donald Trump for president." @WLRN— Kate Stein (@stein_katherine) October 20, 2016

Wilson: "We can't allow ourselves to be tricked, hoodwinked or bamboozled." @WLRN— Kate Stein (@stein_katherine) October 20, 2016

Murphy was also in attendance. In his speech, he asked the crowd to vote to preserve the legacy of President Obama.

. @PatrickMurphyFL taking stage now. "Are we going to elect a president and a senator to build on [Obama's] legacy?" @WLRN— Rebekah Entralgo (@rebekahentralgo) October 20, 2016

Oliver Gilbert, mayor of Miami Gardens, welcomed those in attendance to the city and said: "We tore down the White Only sign at the White House. In this election, we are tearing down the Men Only sign".

"This election we are tearing down the men only sign at the @WhiteHouse," said @CityofMiaGarden mayor Oliver Gilbert— Teresa Frontado (@tfrontado) October 20, 2016

The rainy afternoon didn't dampen the spirits of the participants.

" I am here because this is the last time that he [Obama] is here as president," said Jean Johnson, who stood with her mom in the rain for almost half an hour to get into the Arena.

Thainy Diaz was also in line with her mother and friends, all huddled under a big green and black umbrella. "I am going to miss the Obama family giving us hope," she said. 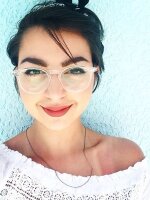 Rebekah Entralgo
Rebekah Entralgo is recent graduate of Florida State University, where she completed a Bachelor of Arts degree in Editing, Writing and Media with double minors in Film Studies and Political Science. Even though her time at a university has ended, she's always looking for her next adventure.
See stories by Rebekah Entralgo

Kate Stein
Kate Stein can't quite explain what attracts her to South Florida. It's more than just the warm weather (although this Wisconsin native and Northwestern University graduate definitely appreciates the South Florida sunshine). It has a lot to do with being able to travel from the Everglades to Little Havana to Brickell without turning off 8th Street. It's also related to Stein's fantastic coworkers, whom she first got to know during a winter 2016 internship.Officially, Stein is WLRN's environment, data and transportation journalist. Privately, she uses her job as an excuse to rove around South Florida searching for stories à la Carl Hiaasen and Edna Buchanan. Regardless, Stein speaks Spanish and is always thrilled to run, explore and read.
See stories by Kate Stein
Kyle Holsten
Black Mental Health
We highlight the stories of Black Floridians seeking emotional healing and wellness.
Read More
Coronavirus
Coverage from WUSF.
Read More
What Issues Matter To You?
What do you want to know before voting in local and state elections this year? WUSF is here to help.
Tell Us