In an office decorated with signs proclaiming “Safe Space,” Peggy Saddler meets with students overwhelmed by classes, fighting with friends and family or struggling with deeper problems.

The Wauchula High School guidance counselor has worked with students in rural counties for more than 30 years and said sometimes students are “shutting the door every night (with) a little bit more than teenage angst.”

Sometimes they’re depressed, even going so far as to cut themselves or contemplate suicide, she said.  So the Hardee County school counselor said she fights to get students the help they need. Often, she looks for signs that are worrisome, but not yet evidence a teen is at risk for suicide.

“One thing we’ve been having issues with is cutting,” Saddler said of the act of poking and slashing skin with a sharp object. “They’re starting in junior high and sometimes we get reports from teachers that someone is self-injurious.”

Suicide is the ninth leading cause of death in Florida, and the 10th in the United States, according to the Florida Suicide Prevention Coalition.

On Sept. 10 every year, advocacy groups across the country honor “ World Suicide Prevention Day” by opening the floor for victims and survivors of suicide to share their stories and reach out to the greater community.

This year, the Tampa Bay Suicide Prevention Task Force and the Crisis Center of Tampa Bay collaborated on an interactive event that includes guest speakers, demonstrations on coping and resiliency, and a candle light vigil to remember people who died by suicide. The event is being held at the James A. Haley VA Hospital.

“We wanted to start this event to help people interact with others who have been impacted [by suicide],” said Ken Gibson, a spokesman for the Crisis Center.

“There will be plenty of people who have personally struggled.”

According to the Centers for Disease Control and Prevention, there is one death by suicide in the U.S. every 13 minutes. Organizers said the Crisis Center event is meant to direct those who may be suffering from depression or grappling with suicidal thoughts on finding help in the community.

Saddler, the counselor who is not involved in the Crisis Center event, said the stigma attached to mental health makes it a tough topic to discuss openly.

"A lot of it is a pull yourself up by your boot straps, suck it up and go on kind of mentality,” she said. “Tough it out."

"People don't want to be seen going to the mental health center,” she said. “I've had parents who have asked for other resources so that they don't have to go here."

Ariana Matos is an intern and Daylina Miller is a reporter at in Tampa. receives support from the Corporation for Public Broadcasting.

Daylina Miller
I took my first photography class when I was 11. My stepmom begged a local group to let me into the adults-only class, and armed with a 35 mm disposable camera, I started my journey toward multimedia journalism.
See stories by Daylina Miller 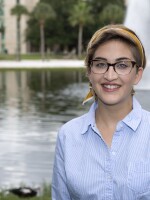