Signs of the Times: NPR and Stations Promote on Billboards and Other Media

You're in the car, cruising along the highway and thinking about that great Morning Edition piece you heard today, when you wonder, "Was that the NPR logo on that billboard?" If you are in San Diego, Dallas/Ft. Worth, Indianapolis, or Orlando – it just might have been.

Between January and April, NPR and Member Stations , , , and are testing out a new visibility campaign that may eventually go nationwide.

The campaign features attention-grabbing (and stereotype-breaking) messages about the diversity of public radio listeners. You can get a sneak peek at some of the billboards, here:

As part of the pilot campaign, a combination of billboards, transit, print and digital ads are currently running or slated to run in the four markets. TV spots and more social media are on the way.

Each ad is tagged with the station call letters and frequency and with the URL where listeners can stream and/or pick and share their own "Radiotype."

Let us know what you think, in the comments section, below. 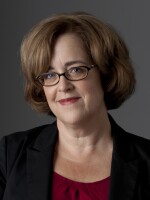 Dana Davis Rehm
Dana Davis Rehm is Senior Vice President for Marketing, Communications, and External Relations. In this role, Rehm creates and executes organization-wide strategies to communicate and market NPR's brand, programming, services, and accomplishments to key audiences, and grow the visibility of NPR and member stations as incomparable sources of news, talk, music, and entertainment.
See stories by Dana Davis Rehm
Class of COVID-19
Exploring the high costs of the pandemic for children and young adults.
Learn More
Latest Stories
WUSF 89.7 depends on donors for the funding it takes to provide you the most trusted source of news and information here in town, across our state, and around the world. Support WUSF now by giving monthly, or make a one-time donation online.
Donate Now