'Extra Lives' Plays Up The Artistry Of Video Games

In Tom Bissell's Extra Lives: Why Video Games Matter, the above quote from one of the video game industry's "legendary" designers nails what the multibillion-dollar business has been haltingly striving toward for decades. It also serves as the flashing beacon on the reader's radar screen, the guiding idea through an exhilaratingly sprawling meditation on what various role-playing, first-person "shooter" and "stealth survival" games are really up to and how they affect the players who get lost in them.

Or in this case, how the games work on a single player, a 35-year-old, prize-winning author. At least in age and sex, Bissell is perfectly representative of the millions of boys who grew up with console games like the Atari 2600 and never abandoned the hobby (or infatuation), playing games of mayhem and fantasy well into adulthood -- for hours and hours, if they can break free from the demands of career, love and family. (In one of his frequent and characteristically puckish asides, Bissell points out that "rarely has wide-ranging familiarity with a medium so transparently privileged the un- and underemployed.")

Parts memoir, criticism and reportage, freely mixing the high ("sodality" and "ludonarrative" pop into sentences) with the low (f-bombs abound), Extra Lives channels the author's intimate history with PS2 and Xbox 360 games into something richer. At its simplest, the book charmingly informs us about the massive complexity and taxing labor entailed in producing a marquee title like Gears of War or Fable II. (These games cost many millions to produce, but can rake in many millions more for their creators. Just take a look, as Bissell does, at the Ferraris and the Lamborghinis in the company parking lot of a North Carolina game developer.)

At its finest, Bissell's book is a thrilling attempt at providing a critical framework for understanding and judging video games. One cannot help but think of the pioneering French cinephile Henri Langlois or the similarly influential Cahiers du Cinema as Bissell -- a literary artist who admits he gets more pleasure from video games now than from literature -- makes us see anew blockbuster games like Far Cry 2, describing to us the creative choices that went into creating these kinds of incredibly popular works and naming for us the experiences such games are trying to provide. All that violence and tension is there for a bigger reason.

Lauding the medium's great achievements (namely, the creation of "open worlds," where a player can roam around and largely do what he likes) and sharing his irritation with its longstanding flaw (lousy storytelling and dialogue), Bissell makes a convincing case that video games are inching toward art, if not some mind-bending realm. Extra Lives, thanks to its insight and passion, may well end up providing one great push toward that end. 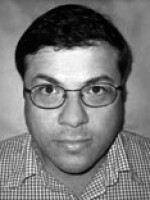 Oscar Villalon
Oscar Villalon is book editor at the San Francisco Chronicle. A member of the board of directors of the National Book Critics Circle, he's also a long-time juror of the California Book Awards, sponsored by the Commonwealth Club. His writing has appeared in the Virginia Quarterly Review and The Believer, and his reviews have aired on KQED's The California Report. He lives with his wife and son in San Francisco.