Living in the World of Cancer

Death has been on the mind of commentator Leroy Sievers lately, and so has life.

Death and I are hardly strangers. In my career as a journalist, I've covered 14 wars, genocides, natural disasters. I've seen literally tens of thousands of people die in front of me. Most of those deaths were sudden, brutal, painful, often without dignity.

There were times I thought I was going to be killed, too. Never really had time to think about it much, though. In those situations, you're usually pretty busy trying not to die. And journalists who go into those situations will always tell you they know that's not the way they're going to die. They just know it.

Then a while ago, I noticed I was slurring my words. One side of my face began to droop. I finally ended up in the emergency room for a brain scan. When I was being wheeled back into the ER, I caught the eye of the doctor, and I knew. I'd seen that look once before.

Four years ago, I came to after a routine colonoscopy to see my doctor's face, and I knew then, too. Cancer. So, I had surgery, and had been clean for four years. I was the poster child for early detection and treatment. Until now.

Sure enough, there was a mass in my brain. A brain tumor, and the next day, another body blow: lung cancer. I pushed my doctor for the worst case scenario, so he gave it to me. Six months.

Funny the things you think about. I'd been meaning to get my eyes checked. Should I still bother? But what's truly amazing is that you can get through something you were certain you couldn't get through. Within a week, they operated to remove the brain tumor. The next morning, I was up and walking around. Truly a miracle.

Granted, I had a line of staples down the side of my head, but that tumor is gone. If it had been Halloween, I would've won a prize. But my friends and family were kind enough to lie to me, saying the staples weren't all that noticeable.

All those times when I was covering the deaths of other people, I always looked for the lessons that I felt were there, but that I was somehow missing. Now I realize I was looking for the wrong thing.

I don't have any great insight into death, but maybe I've learned something about life. It takes courage to get through life. The courage of doctors and nurses who can work magic with their hands, the courage of those keeping a lonely vigil at the bedside of a loved one. The courage of the ill, fighting with everything they have, not just to cheat death, but to live.

I have a long road ahead, but things have started to break my way. My cancer's the type most susceptible to treatment. I've started chemotherapy. And now I live in a different world than most of you. The world of cancer. In my world now, when you meet another patient, you don't ask, what do you do? Or, where are you from? You ask, what do you have? And, what are you taking?

Unfortunately, it's a much bigger world than you might think, because one way or another, cancer touches all of us.

I have work to do, because I'm going to fight like hell. 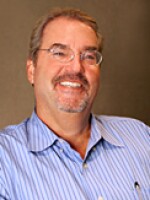